A fleet-footed center fielder who used his athletic gifts to get on base and chase down fly balls on the field, then a broadcaster that used his storytelling skills to become a much beloved voice off the field, Richie Ashburn would become a fixture on the Philadelphia sports scene for a half century.

“Ashburn is the fastest man I’ve ever seen getting down to first base,” said Brooklyn Dodgers manager Leo Durocher in 1948. “He’s even faster than Pete Reiser in his prime. Anybody who’s faster than Ashburn isn’t running. He’s flying.”

The 5-foot-10, 170-pound Ashburn excelled from 1948 to 1959 with the Phillies as the prototypical leadoff hitter and center fielder. With an excellent eye at the plate, he led the league in walks on four occasions and his 1958 season marked the first time a leadoff hitter paced the league in both batting average (.350) and bases on balls (97).

Defensively, Ashburn set outfield marks with nine years of 400 or more putouts and four years with 500 or more. Six of the Top 10 seasons all-time of outfielder putouts were authored by Ashburn, including second place (538 putouts in 1951) and third place (514 in 1949).

“The only complaint I have about him is he wasn’t tall enough to catch the balls that went into the seats," said longtime Phillies teammate Robin Roberts. "He caught everything else.”

After spending two seasons (1960-61) with the Chicago Cubs, Ashburn ended his playing career as a member of the expansion New York Mets for their inaugural 1962 season. Despite hitting .306 and being the lone All-Star representative for a team that lost a record 120 games, he become one of the few regulars to ever retire following a season batting at least .300.

After leaving the field of play, Ashburn began a second career when he returned to Philadelphia as a member of the media. He joined the Phillies’ television-radio broadcasting team in 1963, where he would combine perceptive commentary with a wry sense of humor for 35 years. 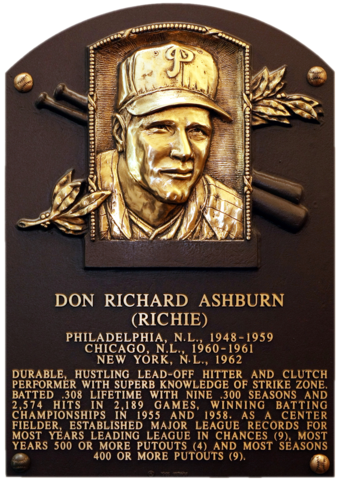 that six of the Top 10 seasons on the all-time single-season outfielders putouts list were recorded by Richie Ashburn?

"He has such a powerful connection with the city of Philadelphia because he not only played there but broadcast there for so long. But I think the reason for the warmth fans felt for him was that everyone had a chance to experience his wonderful sense of humor. "
Tim McCarver 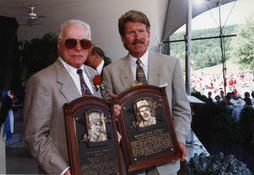 In 1995, Cooperstown came calling for Richie Ashburn, honoring the remarkable center fielder who became one of the game’s best leadoff hitters.

The Class of 1995 was inducted on July 30 of that year in Cooperstown.
Explore more Inductees