As noted in a Tuscaloosa News article following his 2006 induction in the Baseball Hall of Fame, “He was born at the start of a century that’s passed in a town that no longer exists. He played for teams that have long since folded, in leagues that closed up shop more than 50 years ago.”

Even so, the reputation of Mule Suttles was sufficient to ensure his name would not be forgotten.

“He didn’t get the ballyhoo that Satchel and Josh got,” said teammate Squire Moore. “They were the ones who it seemed all the sports writers put the praise on. Mule Suttles was a powerful hitter. I can’t fathom why he didn’t get the publicity they got. He was a laid-back person. He didn’t do much talking. He wasn’t the boastful type. Sometimes the better players get overlooked.”

Born March 31, 1901, in Edgewater, Ala., Suttles – a slugging first baseman and outfielder – had a playing career that lasted almost the entire golden era of Negro Leagues baseball, from 1921 to 1944. He starred with some of the great squads of segregated baseball, including the Newark Eagles, Chicago American Giants and the Birmingham Black Barons.

He topped the .300 mark in 12 full seasons and was particularly known for his power. According to Moore, fans and opponents would gather to watch him at batting practice.

His skills were so noted by his contemporaries that he was selected to play in five East-West Classic All-Star Games, where in 1933 he knocked the first home run ever hit in the event.

In addition to his baseball skills, Suttles was also known as a good teammate, often serving as a father figure to the younger players.

“We always wondered why Uncle George was never mentioned,” said his niece Merriett Burley who accepted his plaque during the 2006 Induction Ceremony in Cooperstown. “They always mentioned Satchel Paige and Josh Gibson and Cool Papa Bell, but they never mentioned Uncle George. We’re now saying he’s getting his just rewards.” 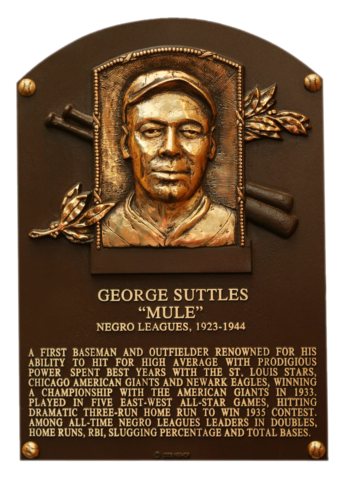 "He was kind of a genteel person. He was friendly, but when he was on the field he went to play. He was all business. "
Squire Moore