“No one ever quarreled with Sam. No one ever knew him with all his strength to be rough or brutal. He was always even-tempered, simple and plain.” – Charlie Bennett

During a time when the play was rough and so were many of the players, being recognized as “plain” was complimentary, and only reserved for true gentlemen. Samuel “Big Sam” Thompson spent time over 15 seasons in the big leagues protecting that reputation while also building a name for himself at the plate.

The right fielder’s most impressive numbers may have been in the RBI category. In 1887, Thompson had 166 runs batted in, a record that stood until Babe Ruth broke it 34 years later. Thompson was the only player in the 19th century to drive in more than 150 runs in a season, and he did it two times (1887 and 1895). He holds the mark for the most RBI in a month with 61, which he accomplished in August of 1895 for the Philadelphia Phillies.

Thompson broke into the big leagues in 1885 with the NL's Detroit Wolverines. In just his second full season in 1887, Thompson led the Wolverines to the National League pennant and a postseason series win over the American Association's St. Louis Browns. Thompson batted .372, scored 118 runs and his 203 hits marked the first time any player had reached 200 in a season. Also included in the record 203 hits were a league-leading 23 triples.

The 6-foot-2, 207-pound Thompson batted a career-high .415 in 1894, even though he missed a month with an injury that required the amputation of his fingertip.

Back problems took Thompson out of the game early in 1898. But after a near decade-long hiatus he made a comeback attempt, playing in eight games for the Detroit Tigers in 1906. Though he had been gone for nearly 10 years, his return allowed him enough time to become one of the oldest players to ever hit a triple, doing so at age 46. 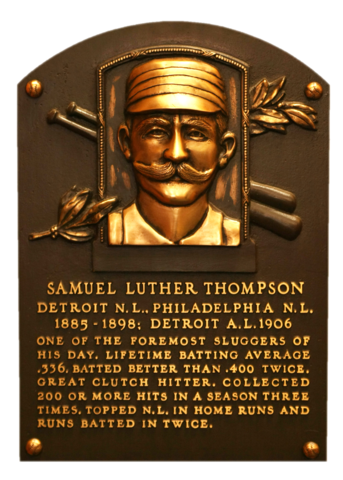 that on May 7, 1887, Sam Thompson became the first big leaguer to hit two bases-loaded triples in the same game, a record since tied but never broken?

"One potentially significant yet unidentified source even credited Big Sam, as a giant fielder, with having originated the one-hop throw to the plate. "
Bob Broeg, St. Louis Post-Dispatch, Feb. 16, 1974