“At the crack of the bat he'd be off with his back to the infield, and then he'd turn and glance over his shoulder at the last minute and catch the ball so easy it looked like there was nothing to it, nothing at all." – Smoky Joe Wood

By the time Tris Speaker turned 22, he was already one of the best center fielders in the game, a player highly regarded for both his work at the plate and in the field.

A Texas native, Speaker began his career with the Red Sox, where he had one of the best seasons of his career in 1912. Speaker earned American League MVP honors that year by finishing first in the voting for the Chalmers Award, leading the AL in on-base percentage with a mark of .464 and carrying Boston to a World Series championship. Speaker had three different hitting streaks of at least 20 games that season. If not for an 0-for-5 day against the White Sox on June 16, Speaker would have hit in 51 straight games.

A tremendous contact hitter who could drive the ball into the gaps and down the line, Speaker led the American League in doubles eight times. Speaker led the Red Sox to another World Series title in 1915, but Boston traded him to the Indians at the start of the 1916 season following a contract dispute. In Speaker’s first season with the Indians, he led the AL in hits (211), doubles (51), batting average (.386), on-base percentage (.470) and slugging percentage (.502). It marked the first time since 1910 that Ty Cobb did not win the AL batting title.

Speaker took over as a player/manager during the 1919 season, a position he held through his final season in Cleveland in 1926. In his first full season as player/manager in 1920, Speaker reached his third World Series, helping the Indians capture the championship over Brooklyn.

Speaker was productive well into his later years in Cleveland, posting career-bests in average (.389) and on-base percentage (a league-leading .479) in 1925 at age 37. He rounded out his career with a season in Washington (where he struck out just eight times in 141 games) and another in Philadelphia, where he retired at age 40 after the 1928 season. He retired as the all-time leader in doubles with 792 and remains at the top of that list.

“I still see more games lost by singles that drop just over the infield than a triple over the outfielder's head,” Speaker said. “I learned early that I could save more games by cutting off some of those singles than I would lose by having an occasional extra base hit go over my head." 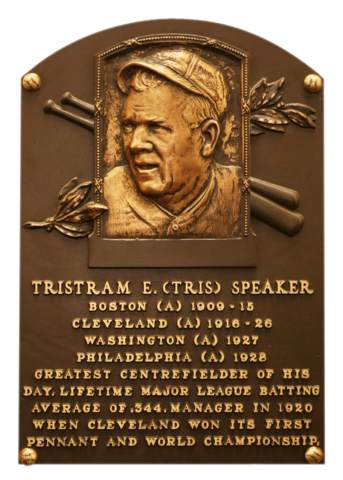 that Tris Speaker is the only Major League player to have three batting streaks of 20-or-more games in a single season (1912)?

"Tris Speaker would lead the outfielders in assists and he used to come in sometimes and get in a run down between first and second base. "
Waite Hoyt 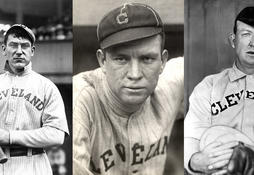 Baseball’s most exclusive fraternity gained a legendary arm and two of the game’s greatest batsmen on Jan. 19, 1937, when Nap Lajoie, Tris Speaker and Cy Young were elected to the Hall of Fame.
Explore more Inductees