In 1962, the face of the St. Louis Cardinals was nearing the end of his illustrious career.

All that meant for Stan Musial is that there were more milestones to reach.

On Sept. 2, 1962, the St. Louis slugger notched the 3,516th hit of his career to pass Tris Speaker for second on the all-time list in a game against the New York Mets. Most record books now list Speaker with 3,514 hits, but at the time he was credited with 3,515 hits.

Musial’s record breaking hit came during a game in which he wasn’t even in the starting lineup. 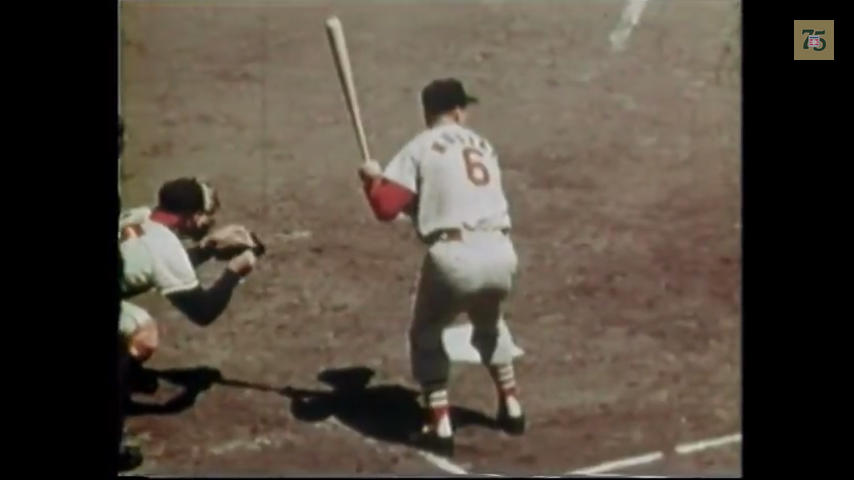 With one out in the ninth and the Cardinals trailing 4-3, Musial would enter the game as a pinch-hitter for pitcher Bobby Shantz.

Following the hit, Musial was lifted for a pinch-runner – exiting the game ranking behind only Detroit Tigers’ Hall of Fame outfielder Ty Cobb in career hits.

For the season, Musial would hit .330, the 17th and final time he would finish a full season with a batting average over .300.

Musial would play one more season in 1963 before retiring. In all, Stan The Man played 22 seasons in St. Louis and was selected to 24 All-Star Games, second place all-time to fellow Hall of Famer Hank Aaron. 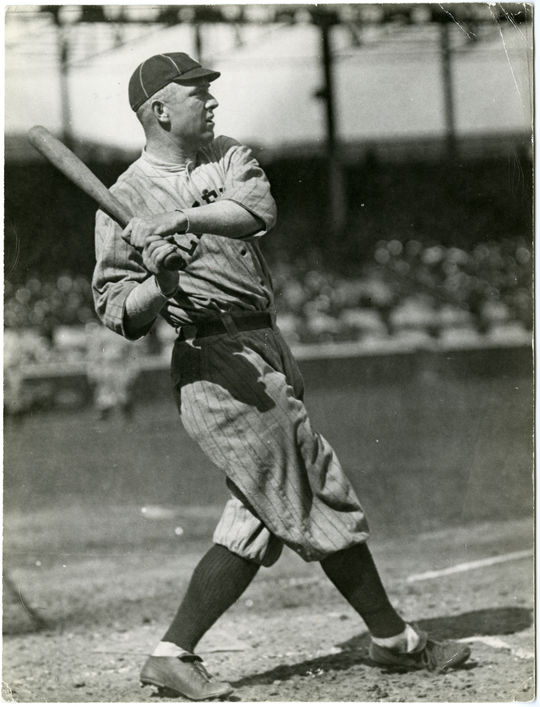 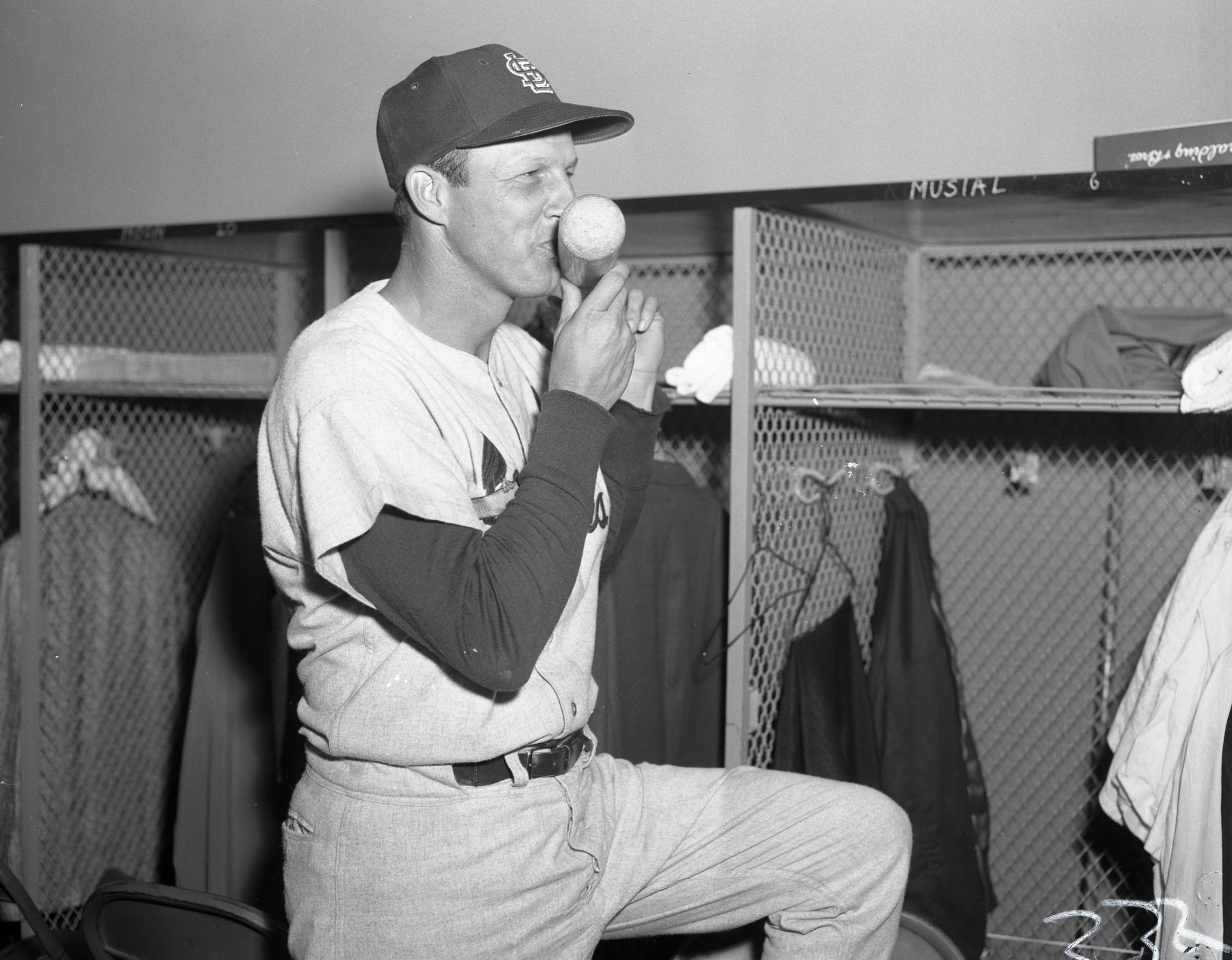 Stan Musial kisses the bat he used to collect his 3,000th career base hit, as a pinch-hitter against the Cubs on May 13, 1958. BL-77-58a (National Baseball Hall of Fame Library)

“He used to take care of me at All-Star games, 24 of them,” fellow Hall of Famer Willie Mays said. “He was a true gentleman who understood the race thing and did all he could. Again, a true gentleman on and off the field – I never heard anybody say a bad word about him, ever.”

At the time of his retirement, Musial ranked second all-time in career hits. His 3,630 career total now ranks as the fourth best in the history of baseball. He also ranks third in career doubles with 725.

Musial was a productive hitter both on the road and at home. He compiled an even 1,815 hits during home games and 1,815 hits away from St. Louis.

Seven times in his career Musial notched over 200 hits in a season, leading the league in hits six times, while winning seven National League batting championships. 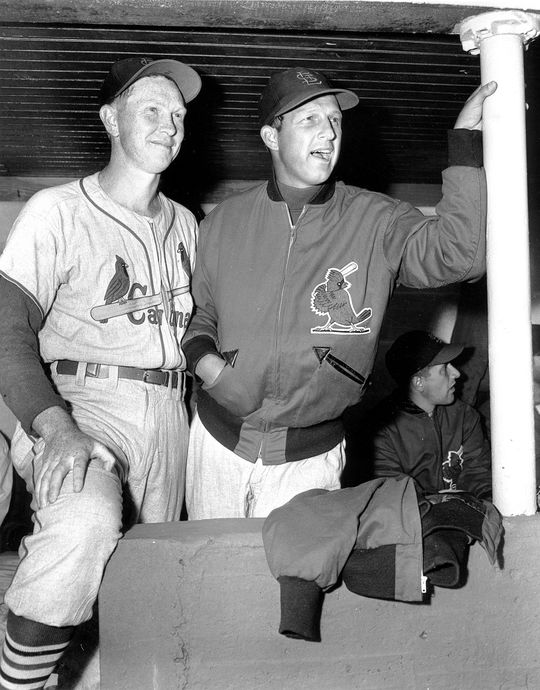 Musial hit .357 in 1943, en route to his first career batting title. He also led the NL in on-base and slugging percentage. The left-hander would crack a league-high 48 doubles and 20 triples to go along with 13 home runs.

For his efforts, Musial was named the league’s Most Valuable Player in 1943, the first of three such awards in his career.

After taking the year off in 1945 to serve in the Navy, Musial returned to baseball with a vengeance. In 1946, Musial captured his second MVP award while leading the Cardinals to their third World Series title in five seasons. He won another batting title hitting .365 while leading the league in hits (228), doubles (50) and triples (20).

Musial’s best season came in 1948 as he fell just one home run shy of winning the National League Triple Crown. He led the league with a scorching .376 batting average, a career best. In addition, he drove in a league-high 131 runs, thanks in part to a staggering .702 slugging percentage and a career-high 230 hits.

He would also finish the season having smacked 39 round-trippers – good for third best in the league – one homer behind future Hall of Famers Johnny Mize and Ralph Kiner. 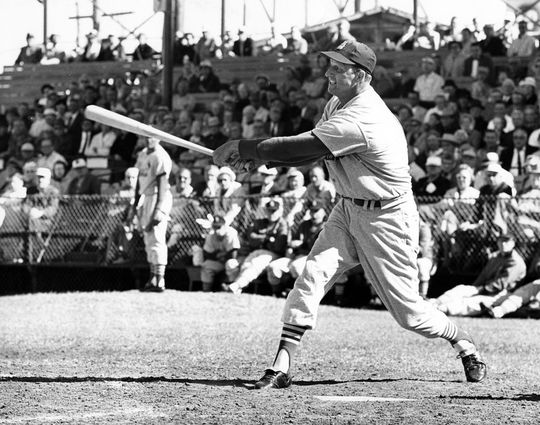 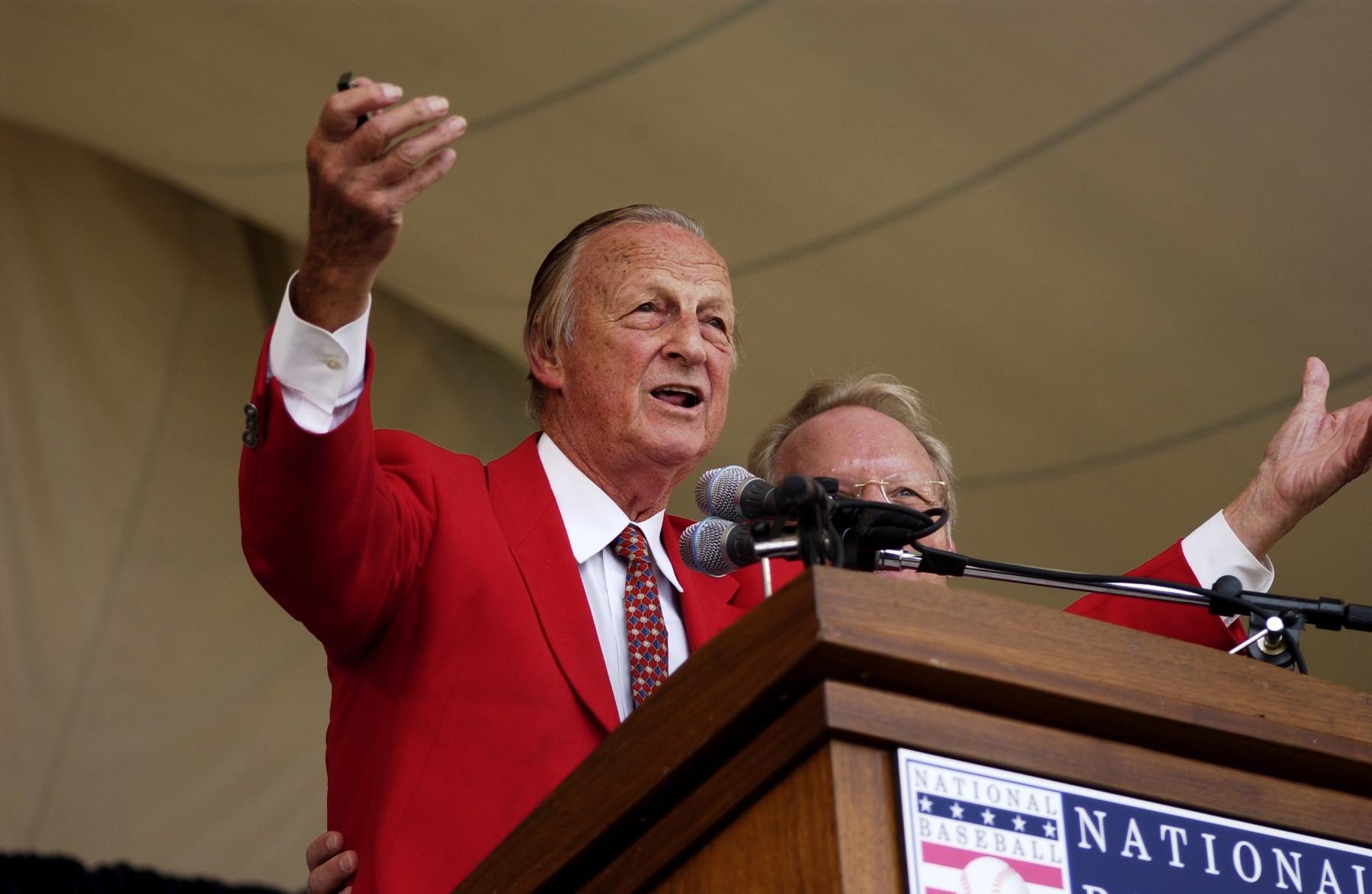 For many years, Stan Musial played his harmonica and led the crowd in a rendition of “Take Me Out to the Ballgame” at the Hall of Fame Induction Ceremony in Cooperstown. (Milo Stewart, Jr. / National Baseball Hall of Fame)

Inducted into the National Baseball Hall of Fame in his first year eligible in 1969, Musial is remembered not just only for his play on the field, but his actions off of it.