In the era before free agency, Jim Bunning proved that great players remain great – regardless of the city they play in.

Bunning, elected to the Hall of Fame in 1996, died Friday at the age of 85. The former pitcher for the Tigers, Phillies, Pirates and Dodgers proved to be one of the game’s most durable and consistent pitchers during his 17-year big league career from 1955-71.

“The Hall of Fame is saddened by the news of Jim’s passing,” said Hall of Fame Chairman Jane Forbes Clark. “His strong support of the Museum, and its activities, will always be appreciated. We send our deepest sympathy to his wife, Mary, and his entire family.”

Bunning, a native of Southgate, Ky., and a graduate of Xavier University in Cincinnati, broke into the big leagues with Detroit in 1955 and by 1957 was the mainstay of the Tigers’ rotation. That year, Bunning was 20-8, leading the American League with 267 1/3 innings pitched and finishing ninth in the AL MVP voting.

During the next six seasons, Bunning won 90 games, was named to four All-Star teams and pitched a no-hitter against the Boston Red Sox on July 20, 1958.

But following the 1963 season, the Tigers traded the 32-year-old right-hander to the Phillies – along with catcher Gus Triandos – for outfielder Don Demeter and pitcher Jack Hamilton.

It turned out to be one of the most one-sided deals in baseball history. Bunning was dominant during the next four seasons, winning 74 games (including 19 in each season from 1964-66) while striking out an average of 248 batters per season. On June 21, 1964 – Father’s Day – Bunning pitched a perfect game against the Mets, making him at the time just the 13th man since 1901 to pitch at least two no-hitters. He is one of only seven pitchers all-time who have thrown a perfect game and a no-hitter. 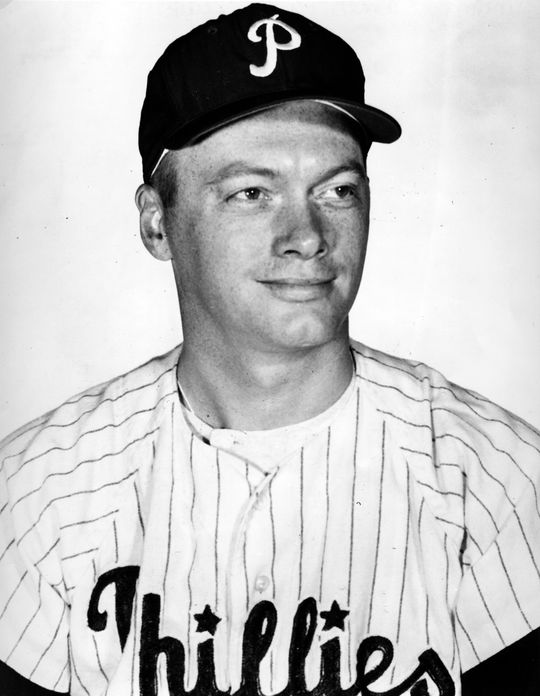 Jim Bunning was second on the all-time strikeout list at the time he retired, with 2,855. (National Baseball Hall of Fame and Museum) 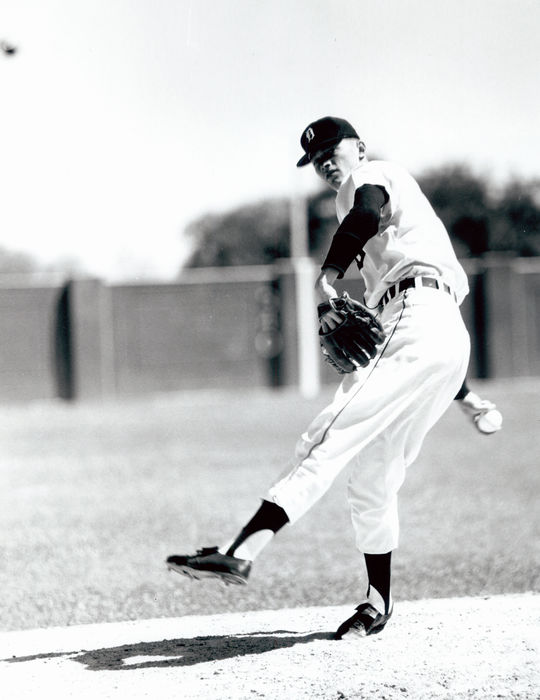 When Bunning retired following the 1971 season, he had amassed 224 wins, 2,855 strikeouts and a 3.27 earned-run average. He was the first pitch to win 100 games in both the National and American leagues since Cy Young.

At the time of his retirement, Bunning’s 2,855 strikeouts ranked second to only Walter Johnson on the all-time list. 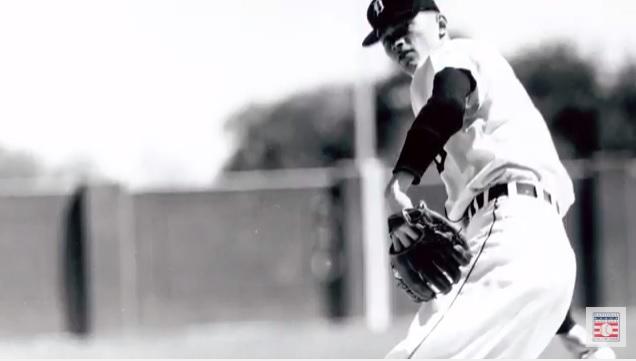 “He would get two strikes on you (quickly), and you didn't want to be caught looking,” said former big league catcher Jesse Gonder. “So you swung (at the third pitch).” 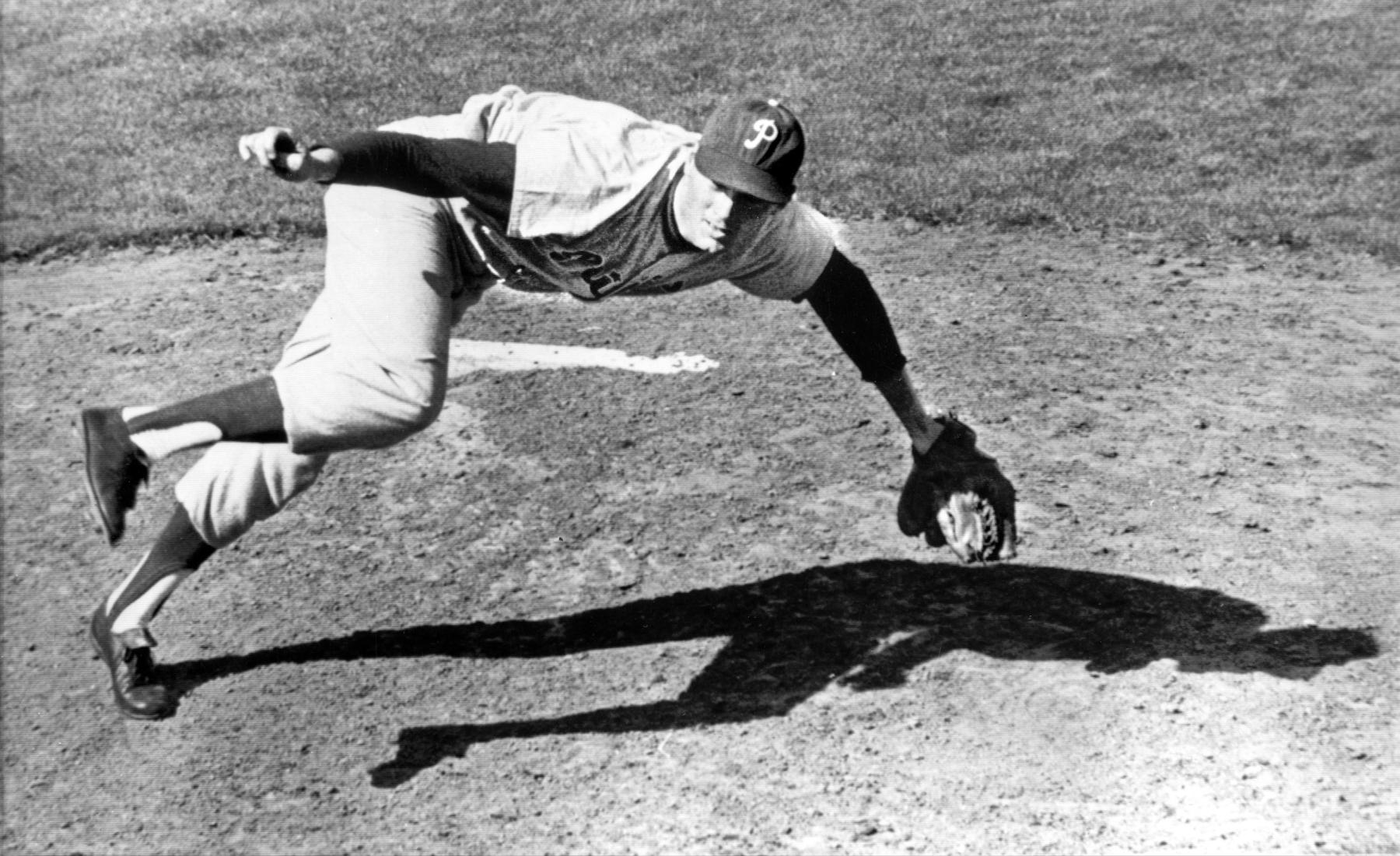 Jim Bunning’s Hall of Fame plaque features a Phillies cap. He won 89 games with the Phillies over six seasons, including a perfect game. (National Baseball Hall of Fame and Museum)

When he was elected to the Hall of Fame by the Veterans Committee in 1996, Bunning had already served almost five terms as a member of the U.S. House of Representatives from Kentucky’s 4th District. In 1998, Bunning ran for a U.S. Senate seat from Kentucky and won election, then was re-elected to the Senate in 2004.

“He was a good competitor, a good pitcher, and a good human being,” said Hall of Fame teammate Juan Marichal. “We’re going to miss him.” 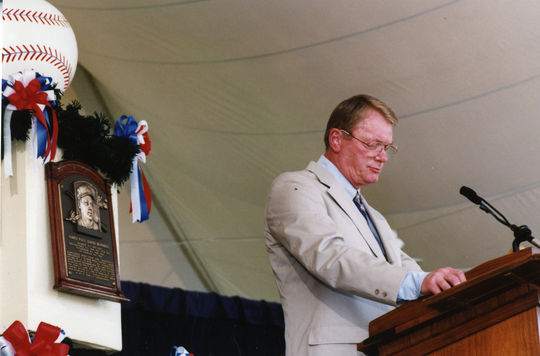 Jim Bunning at his Hall of Fame Induction in 1996. (Milo Stewart Jr. / National Baseball Hall of Fame and Museum)