“If we were looking for a model for a statue of a slugger, we would choose Sam Crawford.” – Baseball Magazine, 1916

“Wahoo Sam” Crawford began his baseball career playing semi-pro ball around his birthplace of Wahoo, Neb. He rose quickly through the minors, debuting at age 19 with the Cincinnati Reds in September, 1899, batting .307 in 31 games.

After moderate success in 1900, he emerged the next season, hitting .330 and leading the league with 16 home runs. The consistent Crawford would hit .333 the following year, and .335 in 1903, when he jumped to the Detroit Tigers. In 1903 also marked his second consecutive year leading his league in triples, with 25; the triple was a specialty of Crawford’s, who finished his career with a big league record 309 three-baggers legged out in the cavernous ballparks of the dead ball era.

With outfield contributions from Crawford and young Ty Cobb, the Tigers broke out in 1907 to win the first of three consecutive pennants. Crawford led the league in runs in 1907 while hitting .323. The next year he led in home runs, with seven, batting .311. In the third straight pennant year, 1909, he hit .314, leading the league in doubles with 35.

“My idea of batting is a thing that should be done unconsciously,” Crawford said. “If you get to studying it too much, you will miss it altogether.” 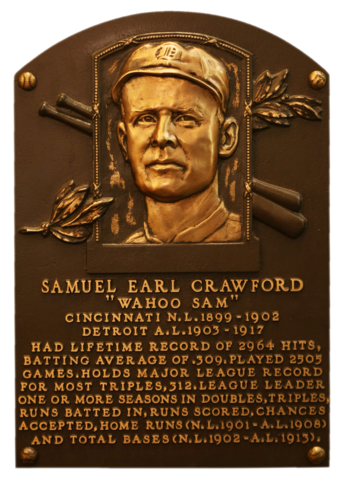 that Sam Crawford holds the single-season record for most inside-the-park home runs, with 12 in 1901?

"With the rabbit ball they’re playing with today, he’d have been one of the greatest home run hitters of all time. "
Ty Cobb