The batter who slashed the National League’s first hit, Jim O’Rourke played the game professionally past the age of 50 before continuing his baseball life as a manager, umpire and minor league president.

Explaining his longevity, O’Rourke said, “I lived a clean life. I never touched liquor in any form, nor did I ever use tobacco. I always took care of myself. That’s the reason I’m playing ball today, and that is the reason why I can enjoy the game.”

Nicknamed “Orator Jim” because of a tendency toward lengthy rhetoric, O’Rourke captured the NL batting title in 1884 with a .347 average. During his career, he batted .300 or better 13 times and finished with a .310 average.

O’Rourke hit a career-high .362 with the 1877 Boston Red Stockings, leading the National League with an on-base percentage of .407. He scored a league-leading 68 runs in 61 games.

In 1890 when a member of the New York Giants of the Players League, O’Rourke put together a standout season. He batted .360 with a career-high 115 RBI in 111 games and a career-high nine home runs.

O’Rourke continued to play in the minor leagues after hitting .287 as a 42-year-old in 1893 for Washington. At the age of 54, he played one more game in the major leagues with the New York Giants, going 1-for-4 for manager John McGraw. 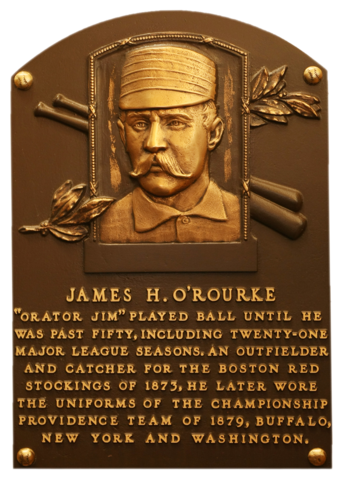 that when Jim O'Rourke took the field as catcher for the New York Giants on Sept. 22, 1904, at age 54, he set a still-unbroken record for oldest player ever to play in the National League?

"O’Rourke has made a brilliant record for himself as an outfielder, being an excellent judge of a ball, a swift runner, and making the most difficult running catches with the utmost ease and certainty. As a thrower, too, he stands pre-eminent, being credited with a throw of 365 feet, the next to the longest yet accomplished by any player. "
The Sporting Life, 1878