“Eddie Plank was not the fastest, not the trickiest and not the possessor of the most stuff. He was just the greatest.” – Eddie Collins

For 17 years, Eddie Plank staked his claim as one of the best left-handers in baseball history. When he retired in 1917, Plank had won 326 games, then the record for most wins by a lefty, and had a 2.35 career ERA. He still holds the records for most complete games and shutouts by a left-hander.

Plank joined the Philadelphia Athletics in 1901, skipping the minor leagues and coming directly from Gettysburg College. He was immediately successful, winning 17 games his rookie year.

While he posted ERAs of 3.31 and 3.30 in his first two years with Philadelphia, they would be the only times Plank’s ERA was above 3.00 in his career. By 1903, Plank had become one of the most reliable pitchers in baseball. That season, he went 23-16 with a 2.38 ERA and led the American League in appearances and games started. Plank’s best year may have come in 1904 when he went 26-17 with a 2.17 ERA and had seven shutouts.

Plank helped the Athletics to their first World Series appearance in 1905, though they lost to the New York Giants. Plank would go on to win three World Series with the Athletics. His 2-5 record in the Fall Classic was simply due to a lack of run support: He had a 1.32 ERA and a WHIP of 0.878 in 54 2/3 innings in the World Series.

After the Athletics lost the 1914 World Series to the Boston Braves, A’s manager Connie Mack broke up the Philadelphia dynasty, releasing Plank – who joined the St. Louis Terriers of the newly founded Federal League. He won his 300th game Sept. 11, 1915, defeating the Newark Pepper 12-5. Plank won 21 games for the Terriers, the last of eight seasons he reached the plateau.

Plank pitched two more seasons back in the AL for the St. Louis Browns, picking up the final 21 victories of his career. Though he had announced his retirement, the New York Yankees traded for him in 1918. Plank remained unswayed, choosing to remain at his farm in Gettysburg, Pa. He spent his retirement as a battlefield tour guide at Gettysburg National Park until he passed away on Feb. 24, 1926. 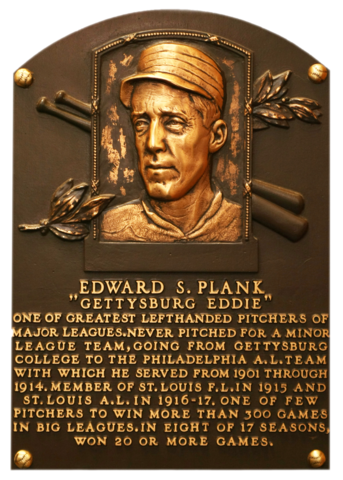 that Eddie Plank, a native of Gettysburg, Pa., worked offseasons at Gettysburg National Military Park as a battlefield tour guide?

"Eddie Plank was not the fastest, not the trickiest and not the possessor of the most stuff. He was just the greatest. "
Eddie Collins