“This glove business has gone a little too far. True, hot-hit balls do sting a little at the opening of the season, but after you get used to it there is no trouble on that score.” – Bid McPhee

John “Bid” McPhee is regarded as one of the best defensive second basemen in the 19th century. For almost his entire 18-year career, McPhee took the field without benefit of a glove. He first used a glove in 1896 when he was 36 and promptly set a record for fielding percentage by a second baseman.

But McPhee’s refusal to wear a glove may be his most remembered quality. When he finally put on a glove for the first time, The Cincinnati Enquirer reported it was in an attempt to protect a sore he had developed on his left hand. His fielding percentage jumped from .955 in 1895 to .978 in 1896.

McPhee retired after the 1899 season at the age of 39. He finished with a career .272 batting average, 1,684 runs scored and a .944 fielding percentage, having led his league's second basemen in double plays 11 times, putouts nine times, fielding percentage seven times and assists six times. His 6,552 putouts remain the most of any second baseman in history. 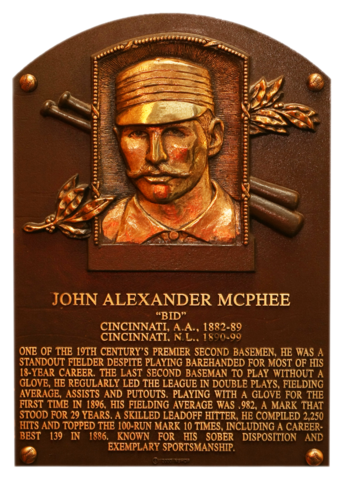 that Bid McPhee, who did not wear a fielder's glove until late in his baseball career, toughened up the skin on his hands by soaking them in salt water?

"He was breaking records barehanded – and when he put on a glove, he set a standard so high that it wasn't broken until 30 years later. "
Ralph Moses