“He’s the greatest relief pitcher that I’ve seen in my 45 years in baseball.” – Herman Franks

Bruce Sutter was on the fringes of professional baseball, a struggling minor league pitcher with an injured arm, until he received a gift that changed his life forever. He learned a new pitch, a split-fingered fastball, from Cubs minor league pitching coach Fred Martin in the spring of 1973. And within just a few years, Sutter was blazing a trail as one of the game’s top relief pitchers.

Martin had been trying to teach Cubs farmhands this new pitch, a derivation of the forkball, with little success. But he now had an apt pupil in Sutter, who needed something new to keep his big league dream alive. After making just two minor league appearances in his first pro season in 1972, Sutter injured his arm and underwent surgery – at his own expense – following the season. He reported to Spring Training in 1973 with a diminished fastball and little expectation of success.

But Sutter quickly mastered the pitch, in which the thumb pushes the ball out from between wide-spread fingers, imparting a sharp forward spin to the ball. What appeared to be an ordinary fastball suddenly dove through the strike zone as it reached the plate.

Sutter debuted in the big leagues in 1976 and by 1977 was entrenched as the Cubs’ closer, finishing with 31 saves garnering the first of six All-Star Game invitations. The Sutter name became known throughout the baseball world with his remarkable 1979 season, winning the National League Cy Young Award after tying the Senior Circuit record with 37 saves.

Cubs’ starting pitchers certainly appreciated seeing Sutter in the bullpen, with Ray Burris once saying: “He was lights out when he came in. As a starter you knew if you got into the seventh or eighth inning that the game was pretty well sealed.”

Dealt to the St. Louis Cardinals before the 1981 campaign, Sutter proved to be the missing piece for a championship-caliber club. Not only did he average almost 32 saves over the four seasons he was with the Cardinals, establishing a NL record for most saves in a season with his 45 in 1984, he also helped the team win the 1982 World Series.

Sutter won or saved the All-Star Game for the National League each season from 1978-81.

“He had the best makeup of any closer I’ve ever seen,” said Whitey Herzog, the St. Louis manager who had also acquired Sutter. “He just cut the percentages down for me from 27 outs a game to 21.”

Sutter signed with the Braves as a free agent following the 1984 season, but shoulder injuries limited his effectiveness over the next four seasons. He saved his 300th career game in his final big league appearance on Sept. 9, 1988 – 17 years to the day after he signed with the Cubs as an amateur free agent. He was the third pitcher in history to reach the 300-save mark. 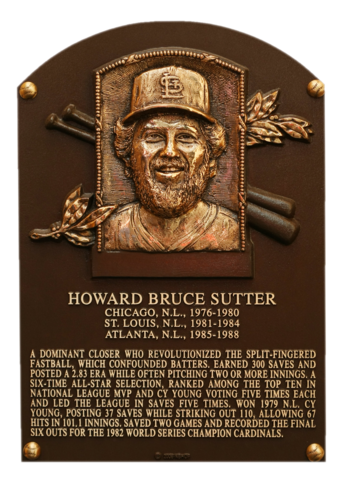 that Bruce Sutter was the first pitcher elected to the Hall of Fame who never started at least one big league game?

"It's unhittable, unless he hangs it, and he never does. It's worse than trying to hit a knuckleball. "
Dick Williams, on Sutter's split-finger fastball 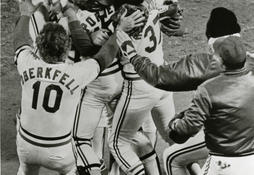 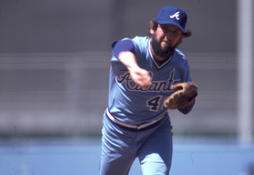 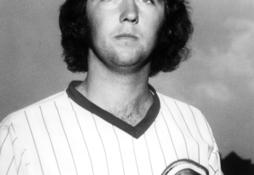 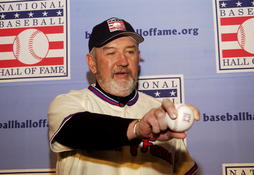