Yogi Berra is a cultural icon whose fame transcended the baseball diamond. “Yogi-isms” such as “it ain’t over till its over” and "a nickel ain't worth a dime anymore” have found their way into the vernacular.

People think of Yogi as funny, but as his manager Casey Stengel once put it: "They say he's funny. Well, he has a lovely wife and family, a beautiful home, money in the bank, and he plays golf with millionaires. What's funny about that?”

Lawrence Peter Berra got the nickname Yogi during his teenage years, when he was playing American Legion Baseball. One afternoon, after attending a movie that had a short piece on India, a friend Jack Maguire noticed a resemblance between him and the “yogi”, or person who practiced yoga, on the screen. Maguire said “I’m going to call you Yogi” and from that moment on, the name stuck.

One thing is clear, as colorful as Yogi’s stories were and as popular as his star shined off of the field, he was also quite the character behind home plate. He had a reputation as a talker, attempting to take opposing batters off their game. In the 1958 World Series, Yogi kept telling Hank Aaron to “hit with the label up on the bat”. Finally, Aaron turned and said “Yogi, I came up here to hit, not to read.”

In addition to his colorful persona, what made Yogi so great was that he was one of the most feared hitters the game had ever seen. Teammate Hector Lopez said: “Yogi had the fastest bat I ever saw. He could hit a ball late, that was already past him, and take it out of the park. The pitchers were afraid of him because he'd hit anything, so they didn't know what to throw. Yogi had them psyched out and he wasn't even trying to psych them out.”

What was even more amazing was that when he donned the “tools of ignorance,” he had a reputation as being one of the best in the business behind the plate.

“Why has our pitching been so great?," Stengel once asked. "Our catcher, that's why. He looks cumbersome but he's quick as a cat”.

Yogi hung up the spikes for good after the 1965 season, a 15-time All-Star, a three time American League MVP Award winner and a 10-time World Series champion as a player. 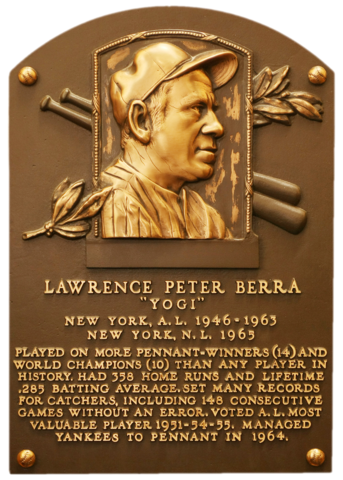 that Yogi Berra provided anti-aircraft cover as a gunner's mate aboard a boat during the Normandy invasion on D-Day?

"He seemed to be doing everything wrong, yet everything came out right. He stopped everything behind the plate and hit everything in front of it. "
Mel Ott 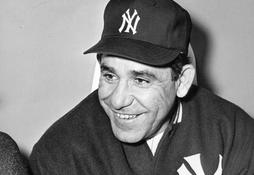 Hall of Famer Yogi Berra passed away at age 90. 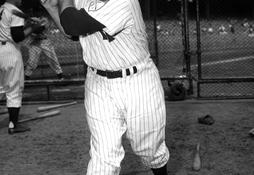