The first big league game Ted Lyons ever saw, he saw from the pitcher’s mound. The 22-year-old Baylor University graduate, who had intended to study law but instead joined the Chicago White Sox, never played a game in the minor leagues.

As a young right-hander, Lyons primarily threw fastballs. He led the American League in wins in 1925 and 1927. His finest season was perhaps 1930, when he won 20 games for the third time (22-15) and led the AL in complete games (29) and innings (297.2). Between 1929 and 1931, Lyons suffered a series of arm and back injuries and began to throw more slow curves – and even slower curves – and knuckleballs. His ability to reinvent his repertoire effectively made a new pitcher out of him.

In 1939, he ran up a streak of 42 consecutive innings without issuing a walk. That year, White Sox manager Jimmy Dykes decided to use Lyons as a Sunday-only pitcher, in part because as one of the few premier players on the Sox, he was an attendance drawing card. Lyons did well in his new role, going 14-6 that year and making the All-Star team for the first time. In 1942, at the age of 41, he completed each and every one of his 20 starts, going 14-6 and leading the AL in ERA.

Upon his 1946 return from the war, Lyons went 1-4 before retiring and being named manager of the White Sox, a post he held until 1948. He later served as pitching coach for the Tigers and Dodgers and scouted for the White Sox.

New York Yankees manager Joe McCarthy once said: “If he’d pitched for the Yankees, he would have won over 400 games.” 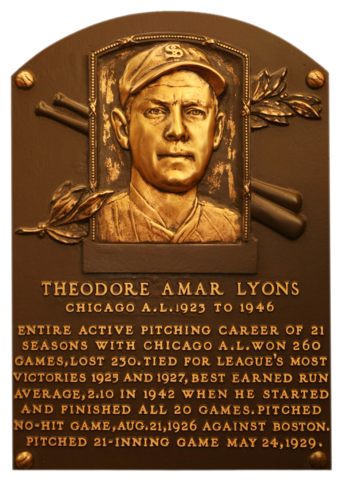 "Ted Lyons was one of the toughest I ever hit at. Great stuff, great control. "
Doc Cramer 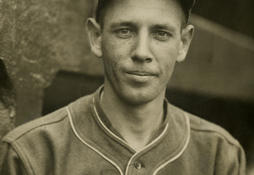 Ted Lyons spent most of his big league career playing for losing Chicago White Sox teams. But that didn't stop him from becoming the winningest pitcher in White Sox history.
Explore more Inductees