In his five-plus decades in the game, Charlie Comiskey found success as a player, manager and owner at the big league level.

Comiskey’s baseball career began as a talented pitcher for amateur ball clubs in Chicago. Despite his father’s objections, Comiskey jumped to a team in Dubuque, Iowa, where arm troubles forced him to switch to first base. Comiskey was one of the original first basemen who did not “hug the line” and played closer to second base to cut off grounders hit toward right field.

In 1882, Comiskey was offered a contract by the St. Louis Brown Stockings in the new American Association. By the following year, Comiskey was managing the team at age 23 and guided St. Louis to four straight pennants from 1885-88. In 1886, Comiskey’s Browns defeated Cap Anson’s Chicago White Stockings of the National League in a six-game series following the season, a precursor of the modern World Series.

In 1892, Comiskey became manager of the National League’s Cincinnati Reds. While there, Comiskey convinced sportswriter Ban Johnson to form the Western League, an organization that would eventually challenge the powerful NL.

Comiskey remained in Cincinnati for three years before purchasing the Western League’s Minnesota franchise and moving it to St. Paul. In 1900, Comiskey received permission from the National League to move his club to Chicago, so long as he didn’t use the city in the team’s name. Happy to oblige, Comiskey cleverly named his team the White Sox, in reference to the NL team he defeated in the 1886 postseason series.

Together, Johnson and Comiskey positioned the Western League, now called the American League, as a direct competitor to the senior National League. Meanwhile, Comiskey was building his Chicago club into a powerhouse. The White Sox captured American League pennants in 1901 – the first year of the AL – and then again in 1906, when they went on to defeat the crosstown Cubs in the World Series.

In 1910, Comiskey paid roughly $750,000 to build his most tangible legacy: Comiskey Park. An impressive steel and concrete structure that would favor the White Sox’s pitching and defense, Comiskey Park would become an enduring symbol of the team for the next 80 years.

Comiskey was also building his reputation as a compassionate owner who loved his team’s fans. He handed out nearly 75,000 tickets to school boys each season and let fans move to the high-priced sheltered seats in the ballpark when it rained.

“Those bleacherites made this big new plant possible,” Comiskey said. “The fellow who can pay only 25 cents to see a ball game always will be just as welcome at Comiskey Park as the box seat holder.”

Though his purse strings were tighter with his players, Comiskey spent enough to build a formidable squad in the 1910s. Featuring players like Eddie Collins, Shoeless Joe Jackson and Eddie Ciccote, the White Sox captured Comiskey’s second World Series championship in 1917. 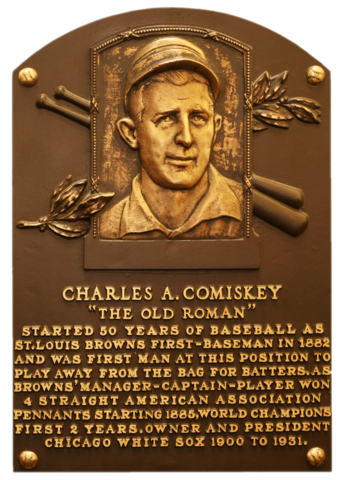 that Charlie Comiskey is credited with being one of the first players to position himself off and well behind the bag as a first baseman?

"The fellow who can pay only 25 cents to see a ball game always will be just as welcome at Comiskey Park as the box seat holder. "
Charles Comiskey