Even in the context of one of the greatest offensive ages in the history of the game, Frank Thomas’ numbers are staggering.

One combination, however, stands out: No other man in baseball history has strung together seven straight seasons of 20-plus homers, 100 RBI, 100 walks and a .300 average. Not Ruth, not Gehrig, not Williams.

Born May 27, 1968 in Columbus, Ga., Thomas starred in both baseball and football in high school but went undrafted in his first year eligible for the MLB Draft in 1986. Thomas then enrolled at Auburn University with the intention of playing football, and the 6-foot-5, 240-pound tight end caught three passes as a freshman that fall.

But Thomas still yearned to play baseball and starred for Auburn in 1987, hitting .359. He played for the United States team in the Pan-Am Games that summer, then was injured playing football in the fall.

From that point on, Thomas was a baseball player.

Thomas was named the Southeastern Conference’s Most Valuable Player in his junior season of 1989, and left school that summer when he was taken with the seventh overall pick by the White Sox. One year later, Thomas made his big league debut as an August call-up, hitting .330 with 31 RBI in 60 games. He would stay ensconced as the White Sox’s first baseman/designated hitter for the next 15 years and quickly earned the nickname “The Big Hurt” for the damage he inflicted on opposing pitchers.

In his first full season in 1991, Thomas batted .318 with 32 homers, 104 runs scored, 109 RBI and an American League-leading 138 walks and a .453 on-base percentage. After leading the league in doubles, walks and on-base percentage in 1992, Thomas won his first Most Valuable Player Award the following year with a .317 average, 41 homers and 128 RBI for a White Sox team that won the AL West title. He was a unanimous choice in the MVP voting, garnering all 28 first-place votes.

The next year, Thomas was even better – hitting .353 with 38 home runs, 101 RBI and a league-best 106 runs scored in just 113 games in that strike-shortened season. He was again named AL MVP, becoming just the American League sixth player (after Jimmie Foxx, Hal Newhouser, Yogi Berra, Mickey Mantle and Roger Maris) to win back-to-back Most Valuable Player awards.

Thomas continued to pile up the numbers in the 1990s, winning a batting title in 1997 with a .347 average. His streak of seven-straight 100 RBI, 100 walk, 20 homer and .300 average seasons ended the next year, but Thomas posted another one of those seasons in 2000 – leaving him with eight for his career.

Only Babe Ruth (12) and Lou Gehrig (9) ever had more, and only Ted Williams and Barry Bonds had as many.

Thomas battled injuries in 2001, 2004 and 2005 – unable to appear in half Chicago’s games in any of those seasons. Following the 2005 season – where the White Sox won the World Series despite Thomas appearing in just 34 games – the Sox bought out the rest of Thomas’ contract and parted ways with their all-time leader in runs, doubles, home runs, RBI and walks.

His final numbers: 521 home runs with five seasons with at least 40 home runs; 1,704 RBI, a .301 career batting average with a .419 on-base percentage, including four seasons where he led the league in OBP; 1,667 walks with four league-leading seasons in bases on balls; five All-Star Game selections; four Silver Slugger Awards; and nine Top 10 finishes in the AL MVP voting, including his back-to-back wins in 1993 and 1994.

Thomas was elected to the Hall of Fame in 2014. 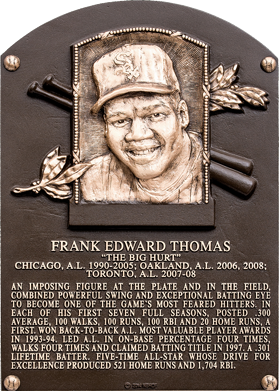 "His professionalism was tremendous. He instilled an attitude in our team that it didn’t matter who was out there, we could beat them. "
Ken Macha 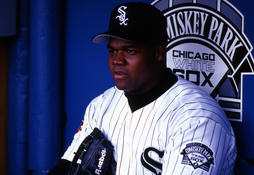 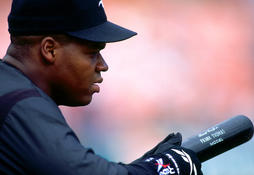 After 16 record-setting seasons with the White Sox, Frank Thomas took his talents - and his power - to Oakland. 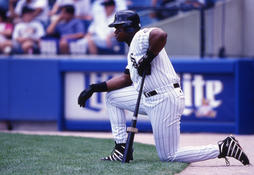 Frank Thomas officially retired on Feb. 12, 2010, setting the stage for his election to the Hall of Fame.
Explore more Inductees