"If I were catching blindfolded, I'd always know when it was (Jimmie) Foxx who connected. He hit the ball harder than anyone else.” – Bill Dickey

Jimmie Foxx, the powerful Sudlersville, Md., farm boy, signed his first professional contract with the nearby Easton minor league club at age 16 and made his big league debut before the end of his junior year in high school.

Foxx played sparingly during his first few years in the big leagues, blocked at his regular position, catcher, by another future Hall of Famer, Mickey Cochrane.

Hall of Fame backstop Rick Ferrell said of Foxx’s ability behind the plate: “If it wasn’t for Cochrane, Foxx would have developed into a great catcher. He was the greatest all-around athlete I ever saw play Major League Baseball.”

Foxx finally broke out and earned regular playing time at a new position, first base, in 1929 – leading the Athletics to the first of two consecutive World Series titles.

During his career, he was one of the most dominant offensive forces in the majors as he put together 12 30-home run seasons and 13 100-RBI seasons. He captured three American League Most Valuable Player Awards, was selected to nine All-Star teams and took home the American League Triple Crown in 1933. When he retired in 1945, his 534 career home runs were second to only Babe Ruth and the most by any right-handed batter in big league history.

Dubbed “The Beast” because of his powerful right-handed swing and the distance of his prestigious blasts, Hall of Famer Ted Lyons recalled: “He had great powerful arms, and he used to wear his sleeves cut off way up, and when he dug in and raised that bat, his muscles would bulge and ripple.”

The nickname “The Beast” is also a little bit deceiving as Foxx had a reputation for being one of the kindest, most generous men in the game. Near the end of his career, when he was let go by the Red Sox, teammate Charlie Wagner lamented: “When Jimmie was released it was a shock to us all, because he was greatly admired by every one of his teammates.”

Foxx was elected to the Hall of Fame in 1951, then in 1952 became one of three Hall of Famers to manage in the All-American Girls Professional Baseball League, along with Dave Bancroft and Max Carey. Foxx managed the Fort Wayne Daisies to a first-place finish in his only season as an AAGPBL manager in 1952.

Hall of Fame hurler Lefty Gomez, who faced Foxx many times in his career, proclaimed: “When Neil Armstrong first set foot on the moon, he and all the space scientists were puzzled by an unidentifiable white object. I knew immediately what it was. That was a home run ball hit off me in 1937 by Jimmie Foxx.” 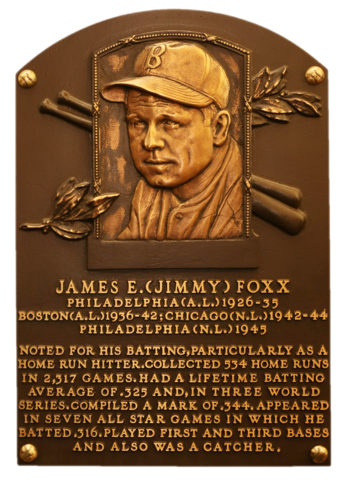 "When Neil Armstrong first set foot on the moon, he and all the space scientists were puzzled by an unidentifiable white object. I knew immediately what it was. That was a home run ball hit off me in 1937 by Jimmie Foxx. "
Lefty Gomez 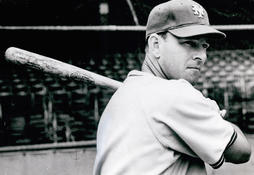 Jimmie Foxx and Mel Ott comprised the Class of 1951 at the Hall of Fame. 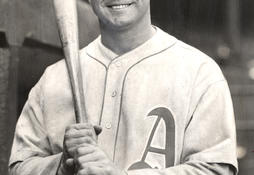 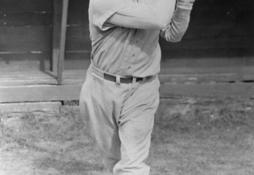 Jimmie Foxx set a new modern era record by walking six times in a game for the Boston Red Sox on June 16, 1938.