Things were looking promising for Ray Washburn, the starting pitcher for the St. Louis Cardinals, on Aug. 17, 1966. He was pitching hitless ball against the first-place San Francisco Giants, cruising with a 3-0 lead.

Then Willie Mays stepped up to the plate.

“It was a slider that got up around the waist,” Washburn explained to the United Press International after the game. “I figured it was gone when he hit with the wind blowing to right as it was. It was just one of those things."

In front of an estimated crowd of 21,956 people, Mays launched a 3-2 fastball straight over the right field fence at Candlestick Park, not far from the 357-foot marker.

For Washburn, the first – and last – home run that Mays would hit off of him would be one of the most significant of his Hall of Fame career. With it, the “Say Hey Kid” passed Jimmie Foxx on the all-time home run list with 535, moving into second place behind Babe Ruth. Since Ruth was a lefty, the home run simultaneously established Mays as the greatest right-handed home run hitter of all time. The clout – Mays’ 30th of the year – also launched a Giants comeback that resulted in a 4-3 victory, thanks to eighth-inning RBI by Willie McCovey and Tito Fuentes.

Mays credited the achievement to his feeling of ease at the plate, admitting that he never did well under the stress of impending records.

“I tied (Mel) Ott’s record (of 511 home runs) in Houston and then came home and no one let me forget that my next homer would be a record,” Mays said. “The pressure began building up, and I couldn’t help but feel it. The harder I tried, the worse off I was. This time, though, I got to 533 on Sunday, 534 two days later and 535 the next day. There wasn’t time for the pressure to build up.”

Mays began the 1966 season with 505 home runs, passing three Hall of Famers to get to his then-record of 535: Foxx’s 534, Ted Williams’ 521 and Ott’s 511. When Mays returned to the clubhouse after the historic game, he had a telegram from Foxx waiting for him. It read: “Congratulations and good luck for the future. I hope that you can hit 600.” Mays would finish his career with 660.

But after all the hype surrounding his record-breaking home runs, Mays was ready to focus on the immediate goal of making the playoffs.

“It sure feels great to have it over with,” he insisted. “Now we can settle down and think about winning the pennant instead of worrying about my homers.”

Herman Franks, manager of the San Francisco Giants, said of Mays, to the Associated Press: "The thing about Willie is he never has lost his enthusiasm. He loves baseball. No matter how many records he sets or how much money he makes, he’ll still be a kid out there in the field." (National Baseball Hall of Fame) 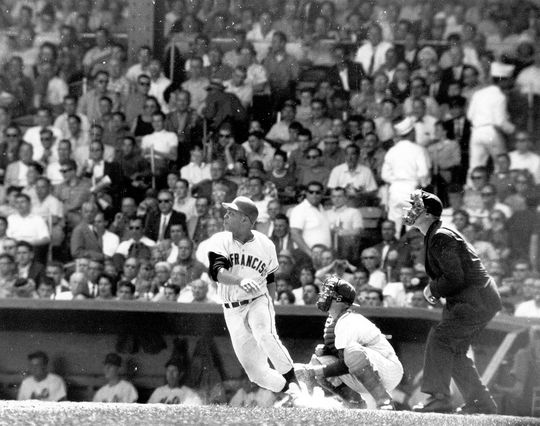 Mays would finish his career with a long list of records. Whether it was putouts by an outfielder, All-Star Game appearances or home runs by a right-handed batter, he covered it all. But his zest for the National Pastime – which can’t be measured in numbers – was one of his greatest attributes.

“The thing about Willie is he never has lost his enthusiasm,” said Herman Franks, manager of the San Francisco Giants, to the Associated Press. “He loves baseball. No matter how many records he sets or how much money he makes, he’ll still be a kid out there in the field.”