Though Earle Combs may have been overshadowed by more celebrated teammates Babe Ruth and Lou Gehrig, the center fielder and lead-off hitter on some of the most successful Yankees teams of the 1920s and ‘30s was held in high regard by those in the game.

“He was a table-setter for Ruth and Gehrig,” said fellow Hall of Fame player Joe Cronin. “He was always on base, it seemed, when they’d hit a homer.

“He was an important cog in that Yankee team of 1927 that a lot of people consider the best of all time. He was a great fielder, a great lead-off hitter and fast as the devil – he could really get to the ball.”

A line drive hitter, a ballhawk in center field and a speed demon in the field and on the bases, Combs was part of four pennant-winning teams and three World Series championships during his 12 seasons with the Yankees.

Included in Combs’ legendary run was the famed 1927 team, nicknamed Murderers’ Row and considered by many as the best team in baseball history. It also produced one of the great outfields, with left fielder Bob Meusel hitting .337, Combs .356, and Ruth .356 – with 60 home runs.

Surrounded by such a powerful lineup, Combs’ ability to showcase his speed on the basepaths was negated. But this didn’t stop a young Combs from one day broaching the subject with manager Miller Huggins.

“Down in Louisville,” Combs said, “they called me the ‘The Mail Carrier.’”

“Up here,” Huggins said, “we’ll call you the ‘The Waiter.’ When you get on first base, you just wait there for Ruth or Gehrig, or one of the other fellows, to send you the rest of the way around.”

Huggins, a fellow Hall of Famer, would later remark: “If you had nine Combses on your ball club, you could go to bed every night and sleep like a baby.”

Nicknamed The Kentucky Colonel, the lefty swinging Combs finished with 1,866 hits and a .325 batting average during a career cut short by injuries. He collected more than 200 hits in a season three times, scored more than 100 runs eight straight years, from 1925 through 1932, and hit better than .300 in eight full seasons with a high of .356 in 1927.

“Combs was more than a grand ballplayer. He was always a first-class gentleman,” Ruth said. “No one ever accused him of being out on a drinking party and you’d laugh at the words he used for cussing. Often he’d sit in his room and read the Bible, for he came from a strict mountaineer family. But Earle was all man, and a great competitor.” 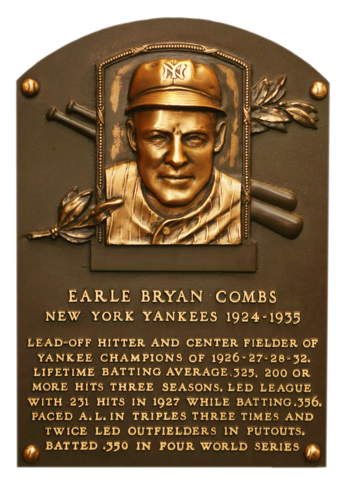 that on April 18, 1929, Earle Combs became the first member of the Yankees to step to the plate wearing a uniform number when he wore No. 1 on Opening Day against the Red Sox?

"If you had nine Combses on your ballclub, you could go to bed every night and sleep like a baby. "
Miller Huggins 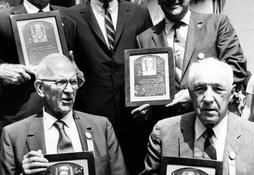 Earle Combs, Ford Frick and Jesse Haines were elected to the Hall of Fame in 1970 by the Veterans Committee.
Explore more Inductees