“Many ball players regard him as the best shortstop in the business; batting, base running and fielding considered.” – The Sporting News Supplements,1899

When he was inducted into the Baseball Hall of Fame in 1998, George Davis was likely the best ballplayer you’d never heard of. But due to the dogged efforts of historians, he finally received his due, a century after he made a name for himself as one of the greatest shortstops in baseball history.

Davis was an outfielder and a solid, dependable hitter for the Cleveland Spiders of the National League from 1890-92. The following February, he was traded to the New York Giants for future Hall of Famer Buck Ewing.

He began with the Giants as a third baseman, eventually transitioning to shortstop. In his initial season with the Giants, his batting average jumped 114 points to .355, kicking off a string of nine consecutive seasons in which he would hit at better than a .300 clip. The switch-hitting run producer was named manager of the Giants in 1895, and returned to that capacity in 1900-01. One highlight of his Giants tenure was his daring rescue of several people from a burning Harlem apartment building in 1900 – Davis and two teammates just happened to be passing by.

He jumped to the Chicago White Sox in 1902, returning to the Giants in 1903, in violation of the peace treaty between the American and National Leagues. The AL and the White Sox kept him out of all but four Giants games that year, and the following season, he returned to Chicago.

A career highlight was his performance as a member of the White Sox's “Hitless Wonders” team of 1906. They won the American League pennant while the crosstown Cubs set an all-time mark with a record of 116-36. If they were in the same league, the Cubs would have finished 22.5 games ahead of the White Sox, and few gave them any chance in the first intra-city World Series. But he upstart Sox beat the Cubs in six games, with Davis batting .308 and driving in six runs.

He scouted and coached briefly after his playing days, but then largely disappeared from baseball, becoming a bit of a mystery. His later life was not well-documented, leading Hall of Fame Historian Lee Allen to write: "How is it possible for a man to play big league baseball for 20 seasons, manage the New York Giants twice, start a war between the National and American Leagues and then utterly vanish, without leaving a trace?" 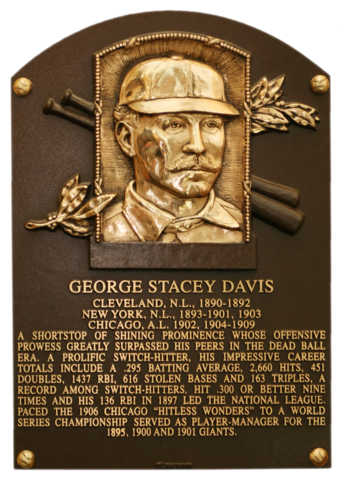 that on June 14, 1893, George Davis became the first player in big league history to hit a home run and a triple in the same inning?

"Davis was a gifted natural athlete and a disciplined, durable player throughout his long career. "
William F. Lamp