When Mickey Welch reached the 300-win mark on Aug. 11, 1890, only two other pitchers belonged to that exclusive club.

It was a fitting reward for a pitcher who dominated the National League in the 1880s.

Born July 4, 1859, in Brooklyn, N.Y., Welch relied on an assortment of off-speed pitches on the mound. He was able to find continued success using the number of different pitches he had in his artillery – and taking time to understand opposition.

“I studied the hitters and I knew how to pitch to all of them,” Welch said. “I had a pretty good fastball, but I depended chiefly on a change of pace and an assortment of curveballs.”

In his first big league season with the Troy Haymakers in 1880, Welch went 34-30 and threw a total of 574 innings. When the franchise moved to New York in 1883, he pitched the first game in the original Polo Grounds in New York City. Welch also played regularly in the outfield that season.

A nine-time 20-plus game winner, Welch won 44 games in 1885, including seven by shutout. From July 18 to Sept. 4 of that year, Welch notched 17 consecutive victories with four shutouts and four one-run games. He completed each of the 55 games he started that year and posted a 1.66 ERA.

Teamed up with Tim Keefe, the pair won 76 games for the New York Giants during the 1885 season. Keefe was the only pitcher in the league to have a better ERA than Welch, at 1.58.

Together, the duo was responsible for 61 of New York’s wins in 1888, bringing their team its first pennant. The Giants were once again league champions when Welch went 27-12 in 1889.

Welch also had 492 career hits, and 92 of them were doubles.

Welch was also the first ever major league pinch hitter. On Aug. 10, 1889, he batted for teammate Hank O’Day in the bottom of the fifth inning. 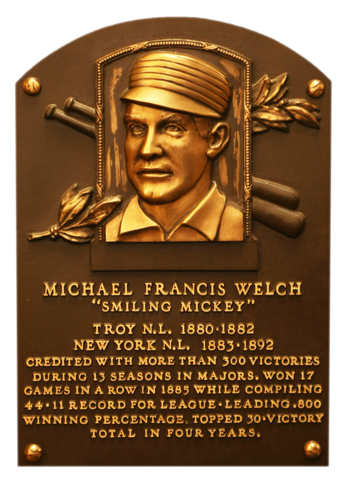 that when Mickey Welch batted for teammate Hank O'Day in the bottom of the fifth inning on Aug. 10, 1889, he became the first pinch-hitter in big league history?

"Smiling Mickey’s pay check never exceeded $4,000 a year and he earned the money. Manager Jim Mutrie had him playing center field on the days he wasn’t pitching and he also had to be at the park an hour ahead of time to watch the turnstile. "
Obituary, 1941