At first base or in the manager’s office, Gil Hodges made the impossible seem possible during 27 seasons in the big leagues.

Born April 4, 1924 in Princeton, Ind., Gilbert Ray Hodges grew up the son of a coal miner. Along with his older brother Bob, “Bud Hodge” – as Gil was known – excelled at baseball from an early age in his hometown of Petersburg, Ind. He enrolled at St. Joseph’s College in Rensselaer, Ind., after high school, and in 1943 was signed by the Brooklyn Dodgers. That year, Hodges appeared in one game as a third baseman with Brooklyn before he enlisted in the Marines for service in World War II.

After serving 29 months in the Pacific, Hodges was discharged and reported to the Dodgers at a new position: Catcher. But with future Hall of Famer Roy Campanella on the horizon, Dodgers manager Leo Durocher moved the athletic Hodges to first base.

By 1949, Hodges was entrenched there after hitting 23 home runs and driving in 115 runs en route to the first of eight All-Star Game selections. Defensively, Hodges’ huge hands made his transition to first base seem seamless.

“I don’t know why he ever wears a first baseman’s glove,” said teammate Pee Wee Reese in reference to Hodges’ defensive skills. “He sure doesn’t need one.”

From 1949-57, Hodges averaged 32 home runs and 108 RBI per season. During those seasons, the Dodgers won five National League pennants and the 1955 World Series title. His peak as a power hitter came on Aug. 31, 1950, when Hodges became just the second modern-era National League player to hit four home runs in one game.

Hodges moved with the Dodgers to Los Angeles in 1958, and in 1959 he hit 25 home runs and drove in 80 runs in just 124 games to help LA win its first National League pennant. Hodges hit .391 in the World Series against the White Sox, leading the Dodgers to their second Fall Classic title in five years.

Hodges wound down his playing career as a part-timer with the Dodgers in 1960-61 and the Mets from 1962-63. In the latter year, the Senators tabbed Hodges as their manager, and he stayed with Washington through the 1967 season.

The next year, Hodges took over the Mets, who had never won more than more than 66 games in a season. By 1969, the Miracle Mets were World Champions.

“Everybody I’ve talked to says he’s the guy who made the difference between being World Champions and a second-rate ball club,” said outfielder Cleon Jones, who caught the final out – a fly ball to left field – of the 1969 World Series against the Orioles. “We would have been real happy to finish second. But he wasn’t satisfied with that.”

Hodges managed the Mets through the 1971 season, but was felled by a heart attack on April 2, 1972, as he left a Florida golf course following a round of 27 holes. Hodges, who had first suffered a heart attack in 1968, died two days short of his 48th birthday.

As a player, Hodges finished with 370 homers, 1,274 RBI and a .273 batting average. He retired with the third-most home runs of any right-handed hitter, trailing only Jimmie Foxx and Willie Mays. He finished in the top 20 of the NL Most Valuable Player voting eight times and won three Gold Glove Awards at first base – despite the fact that the award was not created until 1957.

As a manager, Hodges was 660-753 in nine seasons, including 100 regular season wins and the World Series title with the 1969 Mets. 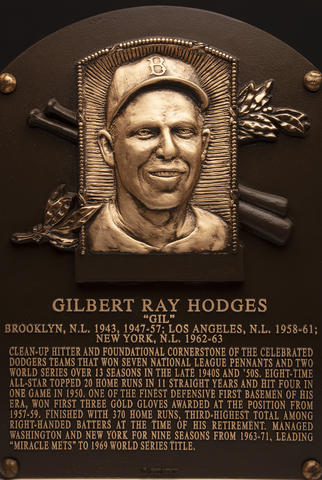 that Gil Hodges retired with the third-most home runs of any right-handed hitter, trailing only Jimmie Foxx and Willie Mays?

"I don’t know why he ever wears a first baseman’s glove. He sure doesn't need one. "
Pee Wee Reese 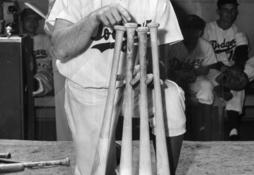 Gil Hodges put himself in the record books with a four home run game in 1950. 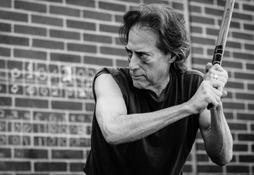 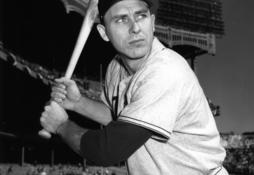 On Oct. 5, 1956, Gil Hodges became the second player to go 3-for-3 with two walks and four RBI in a World Series game, helping the Dodgers to the second-largest World Series comeback.
Explore more Inductees