“I never cared where the strike zone was. I wasn’t looking to walk. Didn’t make no difference to me, high or low, inside or outside.” – Joe Medwick.

In just his second full season in the big leagues in 1934, Joe Medwick had already established himself as one of the National League’s best hitters at age 22 and led the Cardinals to the World Series. Medwick opened Game 1 with four straight hits (including a home run) and went on to hit .379 in seven games against the Tigers, winning his first and only World Series ring.

A solid defensive outfielder, Medwick would go on to become one of the National League’s most dangerous hitters in the 1930s. After Top 5 finishes in the NL MVP race in 1935 and 1936, Medwick received the NL MVP in 1937 when he won the NL Triple Crown and also led the league in hits, runs, doubles, total bases and slugging percentage.

Medwick could hit for average and power, leading the NL in hits twice and extra base hits three times. He enjoyed his finest years with the Cardinals, earning six of his 10 All-Star selections with the club before St. Louis traded Medwick and right-hander Curt Davis to the Dodgers on June 12, 1940, in exchange for four players and a reported $125,000.

Medwick spent four years with Brooklyn, recording more hits than any other Dodgers player from 1940-1942 and helping carry the club to the 1941 World Series against the Yankees.

Medwick spent the latter half of his career bouncing between the Giants, Braves and Dodgers (including an All Star campaign with the Giants in 1944) before returning to the Cardinals for his final two seasons. Even as a part-time player at the end of his career, Medwick hit a combined .301 in his last three seasons.

Though Medwick could hit for power, it didn’t come at the expense of his ability to put the bat to the ball, as he only once struck out more than 60 times in a season. Medwick retired with a .324 batting average, 2,471 hits, 540 doubles and 1,383 RBI. 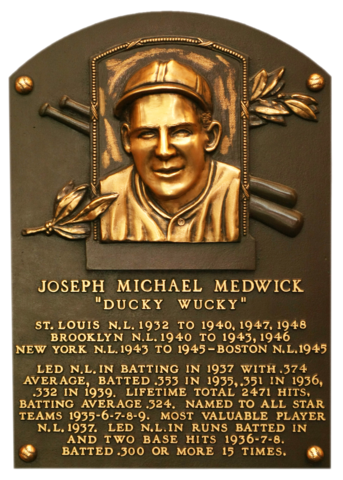 that Joe Medwick was the first player to collect four hits in an All-Star Game when he accomplished the feat in the 1937 Midsummer Classic?

"I'd rather pitch to any other hitter in the league. He's bad news all the time. No game is ever won against the Cardinals until Medwick is out in the ninth. "
Van Mungo