"Big Ed Walsh. Great big, strong, good-looking fellow," Hall of Famer Sam Crawford said. "He threw a spitball. I think that ball disintegrated on the way to the plate, and the catcher put it back together again. I swear, when it went past the plate, it was just the spit went by."

Two achievements in particular speak to right-hander Ed Walsh's dominance of opposing batters at the turn of the 20th century: His lifetime ERA of 1.82, the lowest of all time, and his 40-win season for the 1908 Chicago White Sox.

Walsh stood 6-foot-1 and weighed 193 pounds and by his own estimate threw his outstanding spitball, taught to him by teammate Elmer Stricklett, about 90 percent of the time. At the peak of his powers, Walsh exhibited strong control of the slippery pitch, topping out at 2.2 walks per nine innings in 1912, the final year of his career that he worked at least 100 innings.

He broke in with the White Sox as a 22-year-old rookie in 1904 and worked as a spot starter (21 starts) and reliever (19 relief appearances) for two seasons before ascending to ace of the White Sox in 1906. Chicago’s “Hitless Wonders” club of ’06 rode Walsh all the way to a World Series championship against the crosstown Cubs. Walsh won both of his Series starts, allowing seven hits and six runs (only one earned) in 15 innings. He struck out 17 Cubs batters.

For seven seasons, from 1906 through ’12, no pitcher in the game was more durable than Walsh, and few were as effective. He paced all of baseball with 268 starts (an average of more than 38 per year), 2,526.1 innings (nearly 361 per year) and 1,540 strikeouts during those seven seasons – and he also totaled 89 relief outings and 33 saves. Only Mathewson, with 184 victories in that window, logged more than the 168 wins by Walsh, who posted a 1.71 ERA and .600 winning percentage during that stretch.

Beginning in 1913, Walsh struggled with arm injuries, later recalling: “My arm would keep me awake till morning with a pain I had never known before.” He appeared in just 33 games and pitched 190.2 innings in the five seasons from 1913 though ’17, drawing his release from the White Sox in December ’16 and retiring after one partial season with the Boston Braves. 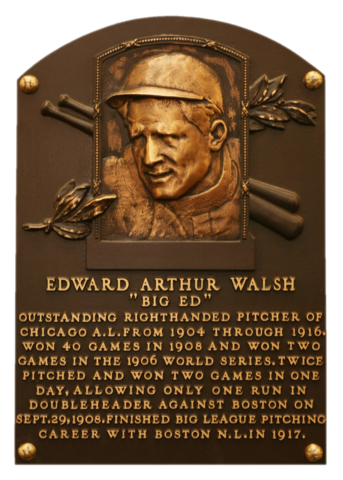 that Ed Walsh is credited with the lowest career ERA in big league history with a mark of 1.82?

"Great big, strong-looking fellow. He threw a spitball – I think that ball disintegrated on the way to the plate and the catcher put it back together again. I swear, when it went past the plate, it was just the spit went by. "
Sam Crawford