The .400 batting average remains the domain of only the greatest hitters baseball has known.

Jesse Burkett visited that rarefied air twice in his career, helping him lay claim to the title as one of baseball’s best hitters.

Burkett’s contract was purchased by the National League’s Cleveland Spiders before the 1891 season, and he honed his skills for most of that year in the minors in Lincoln, Neb. By 1893, he was hitting .348 as an everyday outfielder for the Spiders. In 1895 and 1896, Burkett batted .405 and .410, respectively, becoming just the second player to reach the .400 mark twice.

Burkett was nicknamed “The Crab” by his Cleveland teammates – a reflection of his disposition between the lines.

“You’ve got to be a battler,” Burkett said. “If you don’t, they’ll walk all over you.

“Once the bell rang, I had no friends on the other team.”

Burkett was transferred to the St. Louis Cardinals in 1899 by the Spiders’ owner Frank Robison, who owned both teams. That year, Burkett hit .396 – a figure that was revised down from .402 in future years. After two more seasons with the Cardinals – which included a .376 average in 1901 that was good for his third National League batting crown – Burkett jumped to the St. Louis Browns of the American League for three years. He finished his big league career in 1905 with the AL’s Boston franchise.

For his career, Burkett compiled a .338 batting average on the strength of 2,850 hits. He scored 1,720 runs and notched 320 doubles. Following his big league debut as a pitcher in 1890, Burkett pitched only two more games in the major leagues.

Burkett returned to Worcester following his retirement and later scouted and coached for John McGraw’s Giants as well as coaching for the College of the Holy Cross. 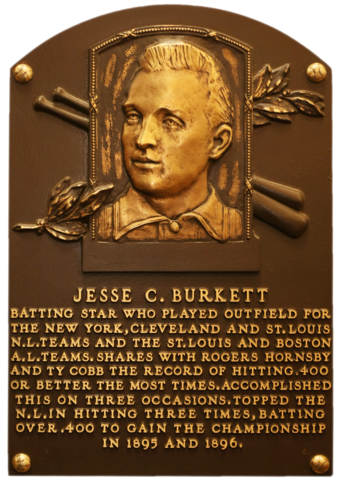 that Jesse Burkett, best known for his prowess with the bat, began his pro baseball career as a pitcher?

"A left-handed hitter who was known as ‘The Crab’ because of his surly treatment of umpires, batted .342 in his sixteen years in the big show, was a colorful hustler, a good team man, a rough base runner, and a steady fielder. "
Lee Allen