“One of the reasons I’ve been able to play baseball well is because it’s fun for me,” Chuck Klein said. “Many players find it work.”

For 17 years, Klein excelled at the game he found so much fun. He spent 15 years as the Philadelphia Phillies right fielder where he was an offensive force. He was named National League MVP in 1932 and followed that performance by winning the Triple Crown in 1933. He was also an All-Star in 1933 and 1934.

Throughout his career in Philadelphia, Klein took advantage of the short right field fence in the Baker Bowl. On defense, he would often turn would-be singles into outs at first base by playing very shallow. In 1930, Klein had 44 outfield assists, a record he still holds.

Klein was one of the most dominant National League hitters of the era. In 1929, his first full season, Klein led the league with 43 home runs. Only Babe Ruth, with 46, hit more home runs in all of baseball.

Though Klein would go on to lead the National League in home runs three more times and finish his career with 300 home runs, he wasn’t just a power hitter. Klein posted a career batting average of .320 and hit .386 in 1930, a career high. Had an MVP been awarded in 1930, Klein likely would have been a favorite as he hit 40 home runs, had 170 RBI and led all of baseball with 158 runs scored. His 445 total bases that season rank No. 4 on the all-time list.

Klein was traded to the Cubs before the 1934 season and was an All-Star that summer. The next year, he would help the Cubs to the World Series, where they lost to the Tigers. In Klein’s only trip to the Fall Classic, he hit .333 with a home run.

Klein returned to Philadelphia during the 1936 season, and on July 10 became the first National Leaguer to hit four home runs in a game in the modern era. He remained in Philadelphia for the rest of his career, save for a brief interlude with the Pirates in 1939. 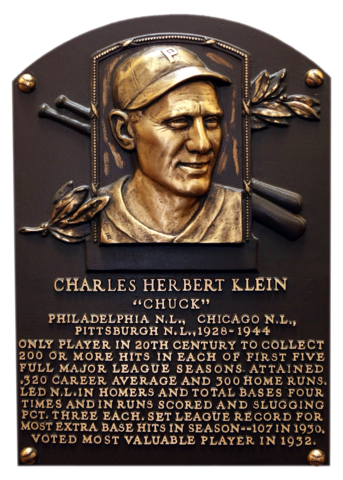 "Chuck was a real nice guy and strong, very, very strong. And a hell of a competitor. "
Billy Herman 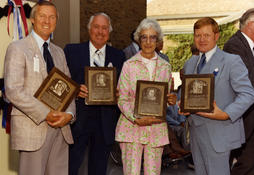