“I’ m going to pitch (Herb) Pennock in spots this season – the tough ones." Joe McCarthy

Herb Pennock saw plenty of tough spots during his 22-year career. He was a part of four World Series-winning teams with the Yankees and was a perfect 5-0 with a 1.95 ERA in 10 World Series games.

Pennock pitched well in the regular season as well, finishing with a 241-162 record. The lanky left-hander was the youngest player in the American League when he made his MLB debut with the Philadelphia Athletics in 1912 at 18 years old.

Pennock played sparingly in the first few years of his career, largely because of the Atheltics' star-laden teams. When Connie Mack split the dynasty up following the 1914 season, Pennock became the ace. He threw a one-hitter on Opening Day in 1915 against the eventual World Series champion Red Sox, but soon found himself shipped to Boston midway through the year.

With the Red Sox, Pennock again found himself on an older team and did not find a spot in Boston's starting rotation until after he returned from his stint with the Navy in World War I. Upon his return, Pennock went 16-8 with a 2.71 ERA in 1919 for the Red Sox.

Pennock was sold to the Yankees following the 1922 season, heralded as the final piece that would bring a World Series title to the Bronx. In his first season in New York, Pennock went 19-6, posting a league-leading .760 winning percentage, and won two games and saved another in the Fall Classic as the Yankees captured their first World Series championship. It was the start of a brilliant six-year stretch for Pennock.

From 1923-28, Pennock went 115-57 with a 3.03 ERA. In those six years, he twice led the AL in WHIP, led the majors in shutouts once and received league MVP votes in three straight seasons. While Pennock was an overpowering pitcher, he prided himself on his command and the ability to throw pitches from many different release points.

After retiring in 1934, Pennock became general manager of the Philadelphia Phillies and was the architect behind the 1950 “Whiz Kids” that reached the World Series.

Pennock passed away on Jan 30, 1948. He was elected to the Hall of Fame that same year. 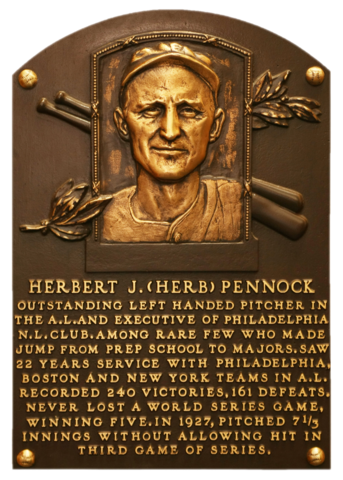 "I am going to pitch Pennock in spots this season – the tough ones. "
Joe McCarthy 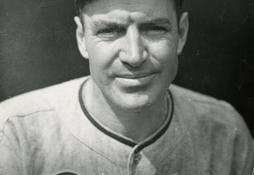 Herb Pennock and Pie Traynor met in the 1927 World Series, then were elected to the Hall of Fame as the Class of 1948.
Explore more Inductees