A strong-armed and durable catcher who could also handle the bat, Rick Ferrell spent nearly two decades working with pitching staffs throughout the Junior Circuit.

An eight-time All-Star, Ferrell played for the St. Louis Browns, Boston Red Sox and Washington Senators between 1929 and 1947. He retired with the American League record for most games caught, at 1,806, until fellow Hall of Famer Carlton Fisk passed him in 1988.

And in the 1940s, Ferrell may have drawn the toughest assignment in the history of catching when he handled a quartet of unique hurlers.

“When I was catching for the Washington Senators, every game was an adventure because our four best pitchers (in 1944 and ’45) were knuckleballers,” said Ferrell, referring to the two seasons in which he led the league in passed balls. “When they released the ball, they didn’t know where it was going and neither did I. But I struggled through two seasons with Roger Wolff, Dutch Leonard, Mickey Haefner and Johnny Niggeling.

“The mental heat catching those things with a big run on third base was worse than physically strapping on the harness for a hot summer doubleheader in St. Louis,” Ferrell said. “I guess having to handle those four flutter pitchers at one time was just the law of averages catching up with me. I’d been spoiled at Boston, handling two of the easiest pitchers I ever caught, Lefty Grove and my brother, Wes.”

Ferrell’s brother, Wes, won 193 games over 15 major league seasons, the two spending time as teammates with the Red Sox and Senators. Rick and Wes Ferrell are two of six brothers from rural Greensboro, N.C. – and two of four to play professional baseball.

“I had five brothers and I was the only one with a mitt,” Ferrell said. “Anyway, they all thought they were pitchers, especially Wes, who wouldn’t put a mitt on. If he couldn’t pitch, he wouldn’t play. I was stuck with the catcher’s mitt, and I’m glad I was.”

And though Ferrell lacked power, smacking only 28 home runs during his career compared to Wes’ 38, he did hit .281 over his 18 major league seasons while topping the .300 mark four times.

“It’s been a nice living but a little hard on the ears,” Ferrell said late in his playing career. “I guess I’ve had to listen to more profanity than any other man in baseball, not that I minded, particularly. When you’ve got the hitters cussin’, your club’s in good shape. They don’t say anything when they’re hitting.” 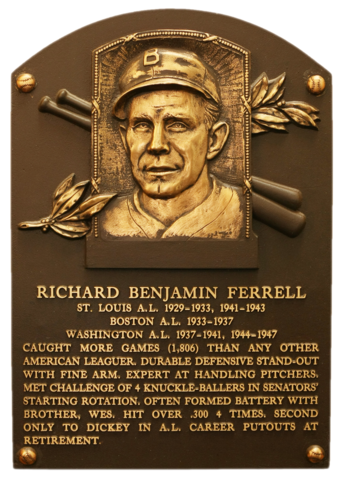 that Rick Ferrell teamed with his pitching brother, Wes, on the Red Sox and Senators from 1934-38?

"Brother or no brother ... he was a real classy receiver. You never saw him lunge for the ball; he never took a strike away from you. He'd get more strikes for a pitcher than anybody I ever saw, because he made catching look easy. "
Wes Ferrell