In an era where every ticket sold meant that much more job security, Raymond Brown was the pitcher of choice in the Negro Leagues.

“He’s what they called their Sunday Pitcher,” said Negro Leagues historian James Riley. “They’d pitch their best on Sunday to draw a crowd, and nobody was better.”

Born Feb. 23, 1908 in Alger, Ohio, the 6-foot-1, 195-pound Brown developed a reputation while still an amateur as an all-around star on the diamond. After short stints with pro teams in Indianapolis and Detroit, Brown hooked on with Cumberland Posey’s Homestead Grays – a blossoming Negro Leagues powerhouse.

In 14 seasons with the Grays, Brown became one of the great stars of African-American baseball, leading the team to eight pennants in one nine-year span. His vast repertoire of pitches included sinkers, sliders and even knuckleballs, but his curve was his go-to offering.

In 1938, the Pittsburgh Courier newspaper listed Brown as one of five Negro Leagues stars who would be certain major leaguers if allowed to play. The others: Cool Papa Bell, Josh Gibson, Buck Leonard and Satchel Paige. All have been enshrined in the Hall of Fame.

Brown, who became Posey’s son-in-law after marrying his daughter Ethel, threw a one-hitter in the 1944 Negro League World Series – leading the Grays to the title – and pitched a perfect game in 1945.

Brown also starred in winter league play during this era, posting an incredible 21-4 record with Santa Clara of the Cuban Winter League in 1936 while hitting .311 at the plate. He completed 23 of his 26 starts that season.

In the Negro Leagues, Brown appeared in two East-West All-Star Games, compiled a 3-2 record in seven Negro League World Series games and finished his Negro leagues career with a record of 122-45.

Brown pitched in the Mexican League and the Canadian Provincial League before retiring following the 1953 season. 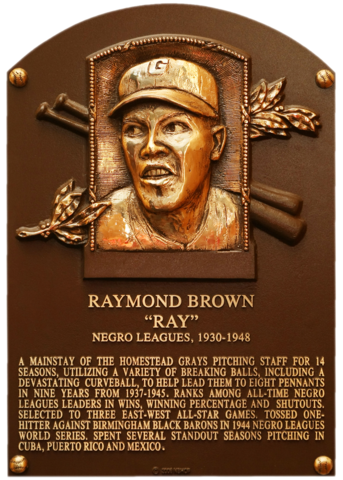 that Ray Brown also played the outfield and pinch-hit when he was not on the mound?

"He’s what they called their Sunday pitcher. They’d pitch their best on Sunday to draw a crowd and nobody was better. "
Jim Riley (Negro League historian and author)