James Francis Galvin would earn the nickname "Pud" over the course of his baseball career for his uncanny ability to make hitters look like "pudding."

Born on Christmas Day 1856 in St. Louis, Galvin would go on to make his debut as a teenager in the National Association for his hometown Brown Stockings in 1875. Four years later, Pud would surface in the National League pitching for the Buffalo Bisons and begin one of the most workmanlike careers baseball has ever seen.

Galvin was renowned for his durability, even in an era of baseball where two-man pitching rotations were commonplace. Galvin's strong constitution allowed him to regularly take the mound and pitch deep into the game.

Over a two-year period spanning the 1883 and 1884 seasons, Galvin won 92 games, nearly a quarter of his career total, while compiling 143 complete games en route to nearly 1,300 innings. Galvin also paced the NL in shutouts in both years with five and 12 in 1883 and 1884, respectively. This stretch represents the height of Galvin's career, and his performance would end up drawing interest from other baseball organizations.

The Pittsburgh Alleghenys purchased Galvin's contract from the Bisons on July 13, 1885, and in 1888, Pud Galvin became the first player in history to win 300 games. Unfortunately, the tremendous mileage Galvin's arm accrued in the previous decade would begin to catch up with him. Galvin's games pitched and innings totals began to fallsteadily until his retirement following the 1892 season.

Pud Galvin would live out the rest of his days in the suburbs of Pittsburgh, for a time working as a National League umpire. 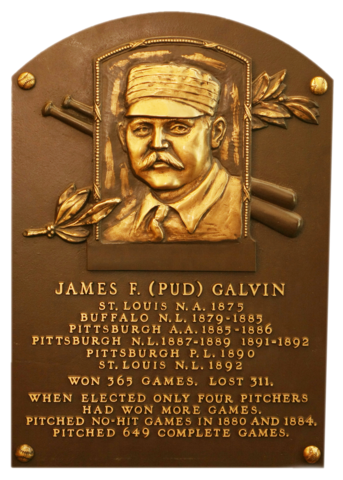 that Pud Galvin won 46 games in both the 1883 and 1884 seasons for the National League's Buffalo Bisons?

"If I had Galvin to catch, no one would ever steal a base on me. That fellow keeps them glued to the bag. "
Buck Ewing