Tommy McCarthy is most famous for his time with the Boston Beaneaters, when he teamed up with Hugh Duffy to form the “Heavenly Twins” from 1892-1895.

McCarthy and Duffy were close friends and won two National League titles together.

McCarthy is given credit for developing the hit-and-run while playing with the Beaneaters. He also is heralded as a pioneer in trapping balls in the outfield in an effort to trick opposing base runners.

“The best man in the business at the trapped-ball trick was Tommy McCarthy,” Giants manager John McGraw said. “He had the play down pat, and on more than one occasion saved his team by resorting to it.”

McCarthy is the only member of the Hall of Fame to have played in the short-lived Union Association, where he began his professional career as a 20-year-old with the Boston Reds in 1884. McCarthy moved into the National League with the Beaneaters the next season, but hit just .182 in 40 games.

McCarthy’s career began to take off in 1888 when he moved to the St. Louis Browns of the American Association. In four seasons with the Browns, McCarthy hit .306 and twice led the league in plate appearances.

In 1892, McCarthy returned to his hometown of Boston and the Beaneaters to form the “Heavenly Twins.” In the four years he and Duffy played together, McCarthy was one of the National League's best hitters. In 1894 he set career highs for home runs (13), RBI (126) and slugging percentage (.490).

McCarthy finished with the Brooklyn Bridegrooms in 1896. He ended his 13-year career with a .292 batting average and 732 RBI. 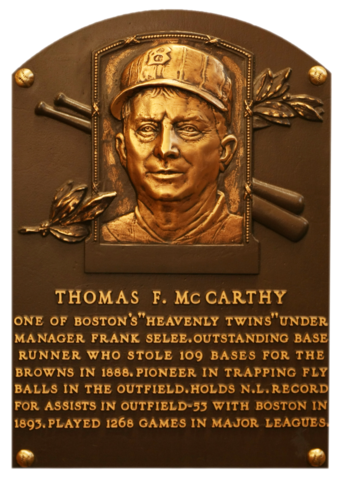 that Tommy McCarthy is the only member of the Hall of Fame to have played in the short-lived Union Association of 1884?

"The best man in the business at the trapped ball trick was Tommy McCarthy. He had the play down pat, and on more than one occasion saved his team by resorting to it. I recall one game in which McCarthy had the opportunity of using the play twice, and on both occasions he made a double play out of it, and Wilbert Robinson was the victim each time. "
John McGraw