During his first nine years, from 1924 through 1932, all with Philadelphia, Simmons led all major league batters with 1,796 hits and 343 doubles, while ranking second with 1,157 RBI and fourth behind Babe Ruth, Lou Gehrig and Hack Wilson with 208 home runs. In that time, Simmons batted .358 and slugged .590 across 5,019 at-bats while finishing as high as second in MVP voting and among the Top 10 four other times.

During a 20-year career, Simmons compiled a .334 batting average, 2,927 hits, 1,828 RBI and 307 home runs, all with an unconventional batting stance that earned him the nickname “Bucketfoot Al” because his stride took him toward third base.

Mack sold Simmons to the Chicago White Sox following the 1932 season in a deal that also sent Jimmie Dykes and Mule Haas to Chicago in exchange for $100,000. Simmons hit .337 and made a pair of all-star teams during his first two years in Chicago, and on April 26, 1934, he collected career hit No. 2,000 in his 1,393rd game, making him the fastest player to that point to reach that milestone.

He turned 33 during the 1935 season, and from that point to the end of his career, Simmons played for seven teams in nine seasons – including two more stints with the A's – batting .287 with 67 homers in 2,577 at-bats. 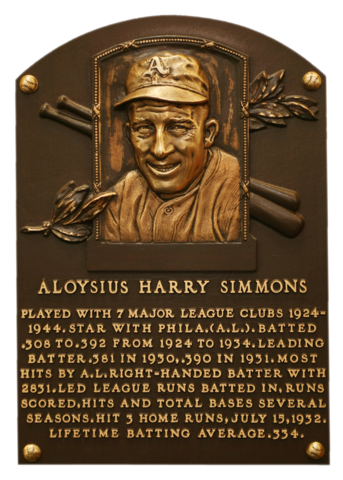 that Al Simmons was born to Polish immigrants in Milwaukee as Aloysius Szymanski, but he changed his name after seeing an ad for a hardware store in the newspaper?

"Big long bat, long as the law’d allow. Could he ever hit that ball! "
Lefty Grove

The National Baseball Hall of Fame saw an integration of baseball's histories as it inducted eight members in 1953. 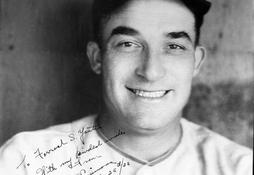 Al Simmons' unusual approach at the plate produced a .334 career batting average and a plaque in Cooperstown.
Explore more Inductees