“I always thought that if Hafey had been blessed with normal eyesight and good health, he might have been the best right-handed hitter baseball had ever known.” – Branch Rickey

Hampered by poor eyesight and severe sinus problems, Charles James “Chick” Hafey played just 1,283 games but still managed to amass 1,466 hits and a career batting average of .317. Hafey won one batting title and was named to the inaugural All-Star Game, where he collected the first ever hit in All-Star Game history.

Hafey was one of the first products of Rickey’s farm system, arriving in St. Louis as a rookie in 1924. He was a part of the 1926 Cardinals team that won the World Series, but was limited after suffering several beanings that season. It is believed his health problems were a result of the beanings, and he would become the most prominent player of his era to wear eye glasses. Hafey continued to wear glasses throughout his career.

Then in 1931, Hafey won one of the closest batting titles ever, edging Bill Terry and Jim Bottomley with a hit in his final game of the season. Hafey then faced Al Simmons, the AL batting champion, in the World Series. The Cardinals beat the Athletics in seven games for Hafey’s second World Series title in four appearances.

Hafey played his final five seasons in Cincinnati, his career came to a close in 1937 at age 34. 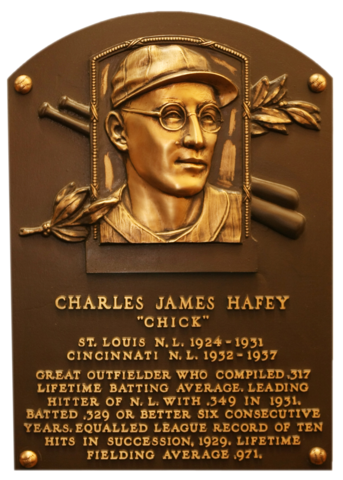 "I always thought that if Hafey had been blessed with normal eyesight and good health, he might have been the best right-handed hitter baseball had ever known. "
Branch Rickey