“People don't know what a great pitcher Leon Day was. He was as good or better than Bob Gibson. He was a better fielder, a better hitter, could run like a deer. When he pitched against Satchel, Satchel didn't have an edge. You thought Don Newcombe could pitch. You should have seen Day! One of the best complete athletes I've ever seen.” – Monte Irvin

A quiet, soft spoken and modest right-hander, Leon Day had a deceptive fastball and a sharp curve. Day pitched in six East-West All-Star Games recording 14 strikeouts. In the 1942 East-West Game, with the West threatening in the seventh inning, the Eagles ace entered the game in relief and shut down the rally retiring the last seven batters of the game, five of them on strikes.

Although his Newark Eagles missed out on the Negro National League pennant that year, Day still had the opportunity to shine in the Negro World Series. On loan from the Eagles to the Homestead Grays, Day pitched a gem against the Kansas City Monarchs, striking out 12 and besting Satchel Paige, a victory that was ultimately overturned when Kansas City protested after the game. The game was replayed without Day on the hill and the Monarchs won that contest and the series.

Following the season, Grays owner Cumberland Posey, who also wrote a column for one of the leading black newspapers, the Pittsburgh Courier, named his annual All-American team for Negro baseball leagues. At the top of that list was Leon Day, whom Posey rated higher than Paige.

“Leon was the best pitcher in Negro Baseball… despite the fact that he was used daily, either as a pitcher, outfielder, or infielder.”

Around that time rumors swirled about the Pittsburgh Pirates possibly giving tryouts black ballplayers. At the time, the Pittsburgh Courier speculated who might be given such tryouts.

“Leon Day is the type of hurler the Pirates need…He has all the qualities necessary for the majors. We believe he could do much better than the Pirates’ leading hurler, Rip Sewell.”

Although the tryouts never took place, this was high praise none the less for the talented right-hander.

Arm troubles and military duty during World War II sidetracked Day’s career for a few years, but he returned from the service in 1946 and experienced perhaps his finest moment on the mound. On Opening Day at Newark’s Ruppert Stadium, Day threw a no-hitter against the Philadelphia Stars.

Day passed away on March 14, 1995, just days after learning he had been elected to the Hall of Fame. 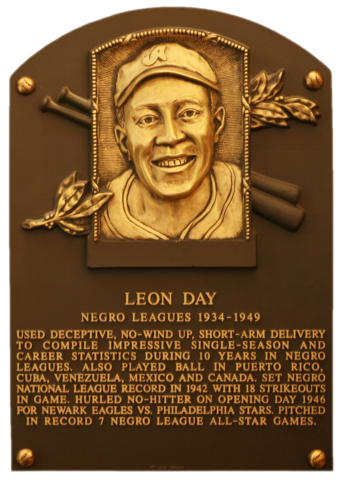