For three decades, he was the standard by which other hitters were judged – seemingly mastering the art of hitting line drives.

In the simplest terms, George Brett was hitting royalty.

Born May 15, 1953 in Glen Dale, W.Va., Brett was the youngest of four brothers who all played pro ball, including older brother Ken Brett who pitched in the majors. Brett grew up in Southern California and was taken in the second round of the 1971 Major League Baseball draft by the Kansas City Royals.

The left-handed hitting Brett shot through the Royals’ minor league system, but after winning the big league third base job in 1974 Brett struggled. Midway through the season, Brett began an extensive tutelage program with Royals hitting instructor Charlie Lau, who taught his pupil how to keep his weight back and cover more of home plate with his swing. Brett applied the advice and finished the season batting .282 – which would be his lowest average during the next 17 seasons.

The Royals advanced to the World Series that year after three losses in the American League Championship Series from 1976-78. But Kansas City lost to the Phillies in the Fall Classic despite Brett’s .375 average.

Brett continued his hitting excellence into the 1980s, and in 1985 he led the Royals back to the World Series – where this time they came out on top in seven games against the Cardinals. Brett hit .335 with 30 homers and 112 RBI that season, winning his first Gold Glove Award at third base and finishing second in the AL MVP vote.

In 1990 at the age of 37, Brett won his third batting title with a .329 mark – becoming the first player to win a batting title in three different decades. Two years later, Brett recorded his 3,000th career hit. He retired after 21 seasons with the Royals as one of only four players with 3,000 hits, 300 home runs and a .300 batting average. that when George Brett was first in the Royals organization, he modeled his batting stance after future Hall of Fame left fielder Carl Yastrzemski?

"If there was one player I ever wanted to be like, it was George Brett. "
Robin Yount 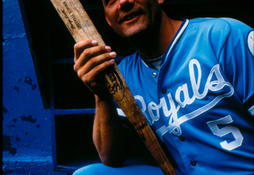 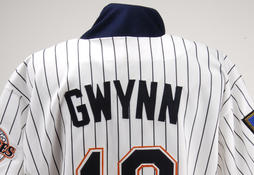