Though Timothy Keefe spent the majority of his baseball career pitching from a distance of 50 feet, he also threw in an era when pitchers worked every other day.

The submarine pitcher spent his first big league season throwing from 45 feet, and his last from 60 feet, six inches, notching 342 victories along the way.

In his first season, he posted a 0.86 ERA in 105 innings pitched. Over his 14 seasons in the majors, Keefe held many records and teamed up with fellow Hall of Famer Mickey Welch to bring the New York Giants not only their first pennant, but he also added two more after that one. His teammate saw the dominance Keefe had over batters firsthand.

“I never saw a better pitcher,” Welch said. “True, he did his best work from 50 feet, but he still would have had no superior at 60 feet, six inches.”

Keefe was sent to the New York Metropolitans from Troy before the beginning of his fourth season in 1883. He pitched 68 complete games that year in 68 starts for a total of 619 innings. He won 41 games and struck out 359 batters along the way.

He also pitched two complete game victories on the same day that year for the Mets, surrendering only three hits between them. On July 4, 1883, he first threw a one-hit gem, followed by a two-hit win later that afternoon.

His best season came in 1888 with the New York Giants. Keefe was the Triple Crown winner, leading the National League in wins (35), strikeouts (335) and ERA (1.74). He also topped the league with eight shutouts, a .745 winning percentage and the fewest average hits per nine innings with 6.57.

The right-hander also had 19 consecutive victories in his best season, a record that lasted 24 years. It was also in 1888 when Keefe and Welch brought New York to the pennant for the first time, a feat the duo was destined to accomplish during their time together.

“Keefe was one of the first pitchers celebrated for his head work,” historian Lee Allen said. “Teaming with...Mickey Welch, he assured the Giants of a well-pitched game almost every day.”

Keefe was the first pitcher to post three separate 300-strikeout seasons, and when he left the game of baseball in 1893, he had fanned 2,564 batters, ranking first all-time. 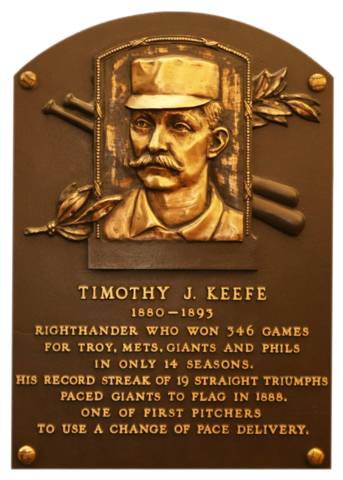