Hazen Shirley Cuyler died 18 years before his election to the Baseball Hall of Fame, but the player nicknamed "Kiki" posted achievements on the diamond far too great to be obscured by history.

Cuyler was born Aug. 30, 1898, in Harrisville, Mich. And for nearly half of his 51 years, Cuyler was one of Major League Baseball's greatest hitters.

“Cuyler can hit, run, field and throw with the best of 'em,” said broadcaster Fred Hoey.

His nickname rhymes with “sky” and was derived from the first syllable of his surname, and few had trouble remembering the strapping right-handed hitter after he posted a .354 batting average in 1924 as a Pittsburgh Pirates rookie. During his first eight big league seasons, Cuyler hit .336 with three 200-hit seasons (and another in which he finished three short). He also averaged 110 runs scored per year (despite missing half of the 1927 season in a contract dispute) and 32 steals.

Cuyler led the Pirates to a World Series victory in 1925, but was benched for the 1927 World Series – in which the Bucs were swept by the New York Yankees. That offseason, Cuyler was traded to the Chicago Cubs for infielder Sparky Adams (who hit .286 in his 13 big league seasons) and reserve outfielder Pete Scott (whose 1928 season with Pittsburgh was his last of three years in the Majors).

For many years, Cuyler spent his off-seasons touring with an All-Star basketball team. He also served as a minor league manager and major league coach following his playing career.

Cuyler was elected to the Hall of Fame in 1968.

He passed away on Feb. 11, 1950, after suffering a heart attack while serving as a coach for the Boston Red Sox. 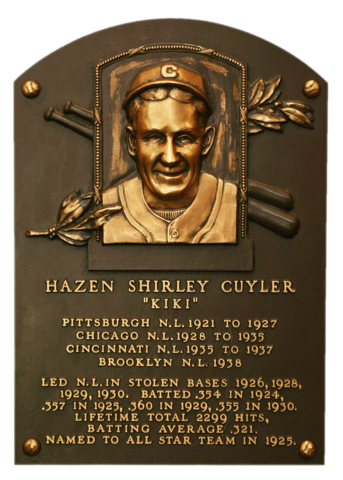 "Cuyler can hit, run, field and throw with the best of 'em. What a great ballplayer he is. "
Fred Hoey