He was a power hitter in an era built for speed and contact at the plate. Dan Brouthers, however, was strong enough – and smart enough – to become one of baseball’s first great long-ball hitters.

Born May 8, 1858 in Sylvan Lake, N.Y., Brouthers became an amateur star in upstate New York thanks to a strapping 6-foot-2, 207-pound build that made him one of the larger players of his era. He made his big league debut in 1879 with the Troy Trojans of the National League, but was released after just 39 games.

After playing in the minors for most of the 1880 season, Brouthers appeared in three more games with Troy, then hooked on with the National League’s Buffalo Bisons in 1881. Over the next five seasons, Brouthers led the league in batting average twice, hits twice, triples once and runs batted in once.

From 1886 through 1894, Brouthers starred for NL teams in Detroit, Boston, Brooklyn and Baltimore – and also made stops with teams in the Players League and the American Association.

“He was a great hitter, one of the most powerful batters of all time,” said future Hall of Fame manager John McGraw, who was a teammate of Brouthers with the 1894 Baltimore team that scored 1,171 runs in just 129 games. “Big Dan in his prime, against (modern) pitching and the modern lively ball, would have hit as many home runs as anybody.”

Brouthers was a part-time player in his final three big league seasons, retiring for good after the 1904 campaign. He won five batting titles and led the league in slugging percentage seven times. The powerful lefty batter never hit worse than .300 in a full season, compiling a .342 career average. He drove in at least 100 runs in five different seasons and scored 100-or-more runs in eight seasons.

Brouthers’ total of 107 career home runs ranks fourth among players who were active in the 19th Century.

“Brouthers meant little to the younger generation,” wrote baseball historian Si Goodfriend. “But he was a great player among great players in his day.” 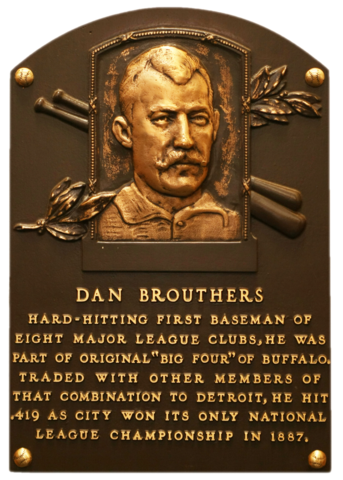 that following his big league career, Dan Brouthers starred in the Minor Leagues, hitting a league-leading .373 as a 46-year-old first baseman with Poughkeepsie of the Hudson River League?

"He was a great hitter, one of the most powerful batters of all time. ‘Big Dan’ in his prime, against the present-day pitching and the modern lively ball, would have hit as many home runs as anybody. "
John McGraw