Hal Newhouser’s career makes for a nice story of a Detroit native made good with the hometown Tigers, but it was nearly not so.

In the summer of 1938, just minutes after Newhouser signed a contract with the Tigers, representatives from the Indians showed up at his family’s home offering a larger bonus of $15,000 and a new car. They were too late, though. Newhouser was a Tiger.

Had the Indians arrived at Newhouser’s home a little bit earlier, the left-hander would’ve been given the chance to be in a rotation with Bob Feller. Instead, Feller and Newhouser’s duels became legendary in the baseball lore of both cities. The Indians and Tigers would rearrange their rotations so their aces would face each other, often on a Sunday to spark attendance.

Newhouser was just 19 when he pitched his first full season in the majors in 1940. After the U.S. entered World War II, Newhouser intended to join the armed forces as so many other players did, but a heart murmur made him ineligible for service. So Newhouser kept pitching and hit his stride in 1944.

Newhouser led the American League in wins and strikeouts in 1944, and he captured the league’s Most Valuable Player Aard. He was even better in 1945, winning the AL’s pitching Triple Crown after leading the league in wins, ERA and strikeouts while being named MVP for the second straight year, becoming the first pitcher to win the award in consecutive seasons. He ended the year by winning two games in the 1945 World Series against the Cubs, including Game 7. Newhouser led the AL in ERA again in 1946 and nearly won a third MVP award, finishing second to Ted Williams.

“I had a philosophy that I pitched against the pitcher and I did not pitch against the hitters,” Newhouser said. “The vast percentage of the time the ball was in my hand, everything was in my favor.”

After his fourth 20-win season in 1948, Newhouser began experiencing arm troubles and he won just 19 games after his 30th birthday. He briefly rejuvenated his career with none other than the Indians in 1954, serving as a reliever and helping the club win the AL pennant in his final full season in the big leagues. 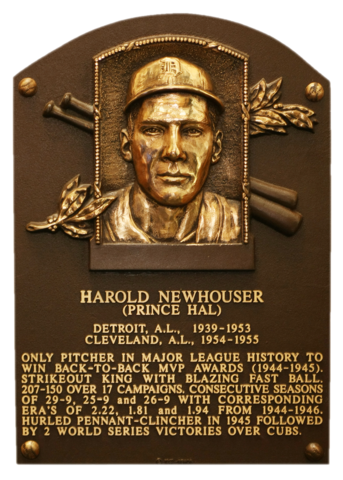 that Hal Newhouser was the winning pitcher in the first night game at Briggs Stadium (later known as Tiger Stadium), as Detroit became the last American League team to install lights?

"Every time he walks to that mound, you know you'll get a good-pitched game. "
Bobo Newsom

On Aug 2, 1992, Tom Seaver, Rollie Fingers, Hal Newhouser and the iron man of umpires, Bill McGowan, were inducted into the Hall of Fame.
Explore more Inductees