“I rated Gabby [Hartnett] the perfect catcher. He was super smart and nobody could throw with him. And he also was an outstanding clutch hitter. – Joe McCarthy

Gabby Hartnett first played in the big leagues at age 21 for the Chicago Cubs in 1922. Two years later he was already one of the best players in the National League, a title he would hold for much of the next two decades. Hartnett was known as an exceptional defensive catcher who evolved into one of the best hitting backstops of his time.

In 1925, he set a record for most home runs by a catcher with 24, the second highest total in the National League behind only Rogers Hornsby. He also developed a reputation for having a strong throwing arm.

Though injured for much of the Cubs’ pennant-winning season in 1929, Hartnett rebounded with his best offensive season up to that point in 1930, hitting .339 with career highs in home runs (37) and RBI (122). Hartnett showed his prowess for handling a pitching staff in 1932 when he guided the Cubs to a 3.44 ERA, the lowest in the National League. The Cubs reached the World Series, where Hartnett hit .313.

Hartnett was a member of the National League roster in the inaugural All-Star Game in 1933, and became an All-Star regular in the game’s infancy. In 1935, Hartnett was named NL MVP after hitting .344 with 13 home runs and 91 RBI. He came in second in the MVP voting in 1937, when he hit .354. That batting average proved to be the best mark by a catcher for 60 years.

Hartnett became player-manager in July 1938 and guided the Cubs to the World Series, where they lost to the Yankees. Hartnett's famous "Homer in the Gloamin" on Sept. 28 against the Pirates put the Cubs in first place to stay.

Hartnett remained the Cubs' player-manager through 1940. He played one final season with the New York Giants as a player-coach before retiring in 1941. 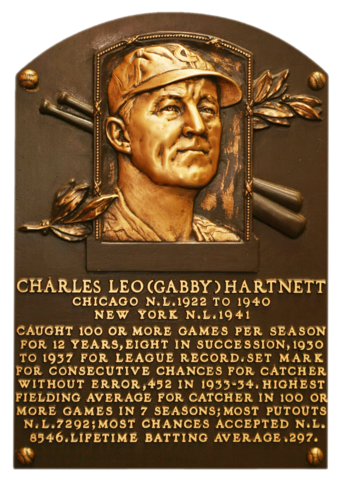 That Woonsocket, R.I., where Gabby Hartnett was born, is also the hometown of Hall of Fame second baseman Nap Lajoie?

"Gabby was the greatest throwing catcher that ever gunned a ball to second base. He threw a ball that had the speed of lightning, but was as light as a feather. "
Joe McCarthy