Jim Bunning was a tough right-handed sidearm pitcher during his 17-year big league career, but consistency was what he craved, once stating: “I am most proud of the fact I went through nearly 11 years without missing a start. They wrote my name down, and I went to the post.”

From 1955 to 1971, in a playing career spent mostly with the Detroit Tigers and Philadelphia Phillies, Bunning would be triumphant in 224 games.

Though the eight-time All-Star would have only one 20-win season, Bunning would win 19 games four times. Often pitching with tough luck, he lost a major league-record five 1-0 decisions in a season. When Bunning retired, he was second on the all-time strikeouts list to Walter Johnson with 2,855.

Bunning’s most memorable performance may have come on June 21, 1964 when, on Father’s Day, the father of nine tossed the ninth perfect game in major league history and the first no-hitter by a Phillies pitcher in more than 58 years in a 6-0 victory at the New York Mets. He also pitched a no-hitter for Detroit on July 20, 1958, against Boston, winning 3-0.

“For most pitchers like me, who aren’t overpowering supermen with extraordinary stuff like Sandy Koufax or Nolan Ryan, a no-hitter is a freaky thing,” Bunning said. “You can’t plan it. It’s not something you can try to do. It just happens.

“Everything has to come together – good control, outstanding plays from your teammates, a whole lot of good fortune on your side and a lot of bad luck for the other guys. A million things could go wrong – but on this one particular day of your life none of them do.”

Besides throwing no-hitters in the American and National leagues, Bunning was also the second pitcher, behind Hall of Famer Cy Young, to win 100 games and collect 1,000 strikeouts in both circuits.

Allen Lewis, a 1981 Ford C. Frick Award honoree who covered Bunning while writing for the Philadelphia Inquirer, said: “He’s the only pitcher I ever saw who never threw a pitch that he didn’t know exactly what he was trying to do with it. He had purpose with every pitch.”

Fellow Phillies pitcher Dennis Bennett may have summed up Bunning’s important best when he said, “He’s the leader of the staff. When he loses, we are shocked.” 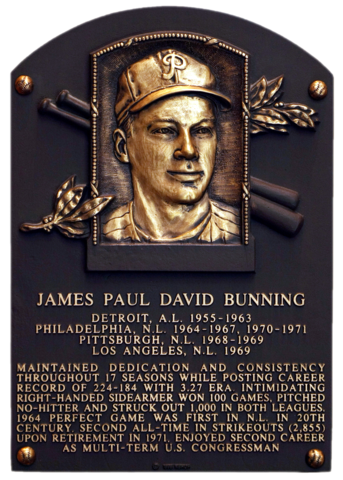 that Jim Bunning's perfect game of 1964 was the first such gem pitched in the National League since 1880?

"He’s 200 pounds of pride. He takes care of himself, likes money, loves his family, has a great arm and a great delivery. "
Gene Mauch 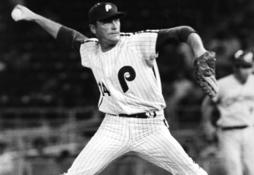 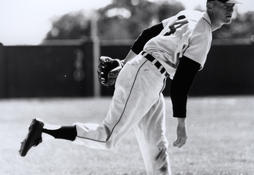 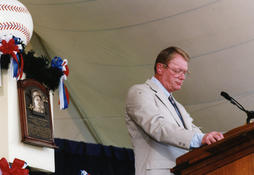 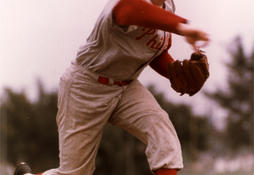 Shea Stadium was a sauna on June 21, 1964. But Phillies pitcher Jim Bunning only got better as the day got hotter.
Explore more Inductees