During the 1913 offseason, Red Faber had yet to pitch an inning of big league baseball, but he had made an impression in the minor leagues and the White Sox, who purchased his contract to take him on a world tour against the New York Giants.

During the tour, the Giants were short pitchers and borrowed Faber for a game in Hong Kong.

Faber beat his own team for his first win with a major league club and did it three more times on the trip. When the tour ended, the Giants attempted to purchase Faber, but the White Sox refused and made him a regular in their 1914 rotation. From there, it was a short trip to Cooperstown.

“That fellow has a lot of stuff,” said Giants manager John McGraw. “He’s got the best drop curve that I’ve seen along the line for some time. And his spitter is a pippin’, too.”

The right-handed Faber won 254 games during his career with 273 complete games. His career 3.15 ERA and 4,086 innings pitched were products of his low pitch counts. Faber once threw only 67 pitches in a complete game and three times retired the side on three pitches.

Faber won three out of the four decisions to help the White Sox win the 1917 World Series against the Giants, and he won 20-or-more games in a season four times. In 1920, the spitball was outlawed by Major League Baseball, but Faber was “grandfathered in” and was soon the last legal spitballer in the American League.

“The spitball may be a little harder on some pitchers’ arms than a straight fastball, but certainly it is not half as bad as throwing a curve, which causes a continual grind at the elbow and in many cases, permanently shortens a pitcher’s arm,” Faber said. 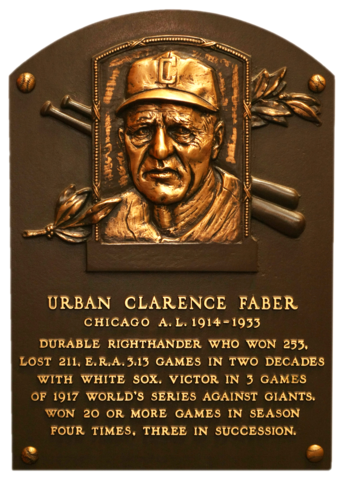 that Red Faber won three games in the 1917 World Series as he paced the Chicago White Sox to the world championship?

"That fellow has a lot of stuff. He's got the best drop curve that I've seen along the line for some time. And his spitter is a pippin', too. "
John McGraw