One of the greatest hitters of all time, Ted Williams, once called fellow Hall of Famer Early Wynn “the toughest pitcher I ever faced.”

Undoubtedly, the Splendid Splinter’s sentiment was shared by many big league hitters for more than two decades.

Wynn combined his physical gifts with intimidation and determination to overcome early struggles and become one of the most dominant hurlers of his era.

“Since the first time I saw my father play semipro ball in Alabama, it has been my greatest ambition and desire to be a big league ballplayer,” Wynn once said.

It was during Wynn’s early years with the Washington Senators that he began to gain a reputation for aggressive play on the mound, exemplified by his willingness to knock down a batter if the occasion warranted.

“A pitcher has to look at the hitter as his mortal enemy,” Wynn once said.

After eight seasons with mediocre Washington teams, in which he had a 72-87 mark, Wynn was traded with first baseman Mickey Vernon to the Indians following the 1948 campaign in exchange for Joe Haynes, Ed Klieman and Eddie Robinson. Within two seasons, Wynn had transformed himself into one of the best pitchers in the American League.

“We were roommates and good friends,” Vernon would recall years later. “After I was traded back to Washington, I got four hits off him the first time I faced him, the last one knocking the glove off his hand. When I got to first base, he was steaming. He looked over and said, ‘Roommate or not, you’ve got to go in the dirt seat next time I see you.’ Sure enough, the next time I faced him, the first pitch was up over my head – to let me know he hadn’t forgotten.”

The move to Cleveland, where he teamed up with Bob Feller, Bob Lemon and Mike Garcia to give the team one of baseball’s great pitching rotations, proved fortuitous for Wynn. He led the AL in ERA with a mark of 3.20 in 1950, reached the 20-win mark four times from 1951-56 and won a big league-best 23 games in 1954 when the Indians captured the AL pennant.

Wynn finished the 1962 season with 299 career wins, but was released by the White Sox after the season. After signing with the Indians, the 43-year-old posted his 300th win on July 13, 1963, becoming the 14th hurler in major league history to achieve the milestone.

Wynn, who pitched in four different decades, finished his big league pitching career with a record of 300-244, struck out 2,334 batters in 4,564 innings and had an earned run average of 3.54. He won at least 20 games in a season five times and was named to nine All-Star Games. 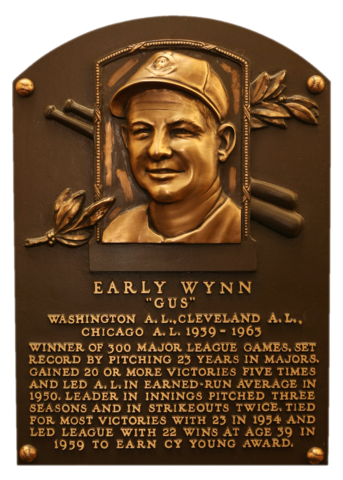 that 300-game winner Early Wynn was also a switch-hitter who tallied more than 100 pinch-hit appearances, including one that resulted in a grand slam?

"Thick set, gristle-bearded, 200 pounds of malevolence toward all who entered the batter’s box. "
J. Astor 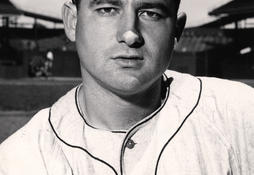 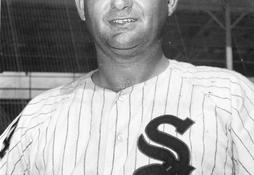 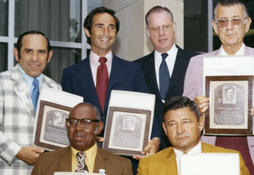 Yogi Berra, Sandy Koufax and Early Wynn were elected to the Hall of Fame by the BBWAA in 1972.
Explore more Inductees