“Judy could do all that is required to make up a sterling third baseman and do it better than the rest of the field. [He] …hit the ball hard to all corners of the lot. Slight of build, this Hilldale luminary was a fielding gem, whose breathtaking plays on bunts and hard smashes are treasured among many fans memoirs.” – Lloyd Thompson

Considered one of the best third basemen to play in the Negro Leagues, William “Judy” Johnson was a slick-fielding clutch performer, and later a manager, scout and coach.

Johnson was born in Snow Hill, Md., on Dec. 26, 1899. At age 18, he began playing semipro baseball for five dollars a game. He quickly moved up to the Hilldale Giants, joining the club full time in 1921. It was there that he acquired his nickname, after a veteran Hilldale player named “Judy” Gans. His mentor as a young player was Hall of Famer John Henry “Pop” Lloyd. Johnson, a smart ballplayer with a skill for recognizing and developing talent, would later serve as a mentor for Hall of Famer Josh Gibson.

Johnson led the Hilldales to three pennants in a row from 1923-25. He played in the first Negro World Series in 1924, when the Giants lost to the Kansas City Monarchs. The Hilldales turned the table on the Monarchs the following year.

In 1929, Johnson was named the Negro Leagues Most Valuable Player by the Chicago Defender and the Pittsburgh Courier, two of the leading African-American newspapers. The following season, he became player-manager of the Homestead Grays. In 1932, he and most of the club jumped to the Pittsburgh Crawfords. He was captain of the 1935 club that featured five future Hall of Famers: himself, Cool Papa Bell, Oscar Charleston and Josh Gibson. He retired as a player in 1937.

In 1951, Johnson scouted for the Philadelphia Athletics, later scouting for the Braves, Phillies, and Dodgers. He signed Richie Allen and Bill Bruton, and could have signed Hank Aaron for the A’s, who reportedly balked at the price. In 1954, he was hired as a Spring Training coach for the A’s, responsible for working with African-American players at spring camp.

From 1971-74, Johnson served on the Hall of Fame’s Committee on the Negro Baseball Leagues. After stepping down from the Committee, he was elected to the Hall in 1975.

Former teammate Ted Page said: “Judy Johnson was the smartest third baseman I ever came across. A scientific ballplayer, did everything with grace and poise.” 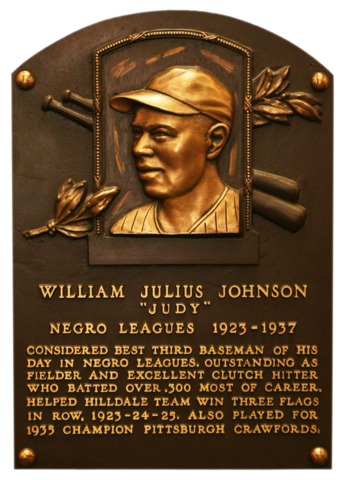 "Johnson was the best hitter among the four top third basemen in the Negro Leagues, but no one would drive in as many clutch runs as he would. He was dependable, quiet, not flashy at all, but could handle anything that came up. No matter how much the pressure, no matter how important the play or the hit, Judy could do it when it counted. "
Cool Papa Bell 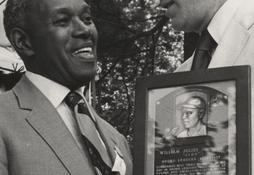 Judy Johnson elected to the Hall of Fame

On Feb. 10, 1975, Judy Johnson was elected to the most exclusive team in baseball.

Learn how the Negro Leagues statistics were gathered.