While Joe McGinnity didn’t reach the major leagues until he was 28 years old, he became an immediate star upon his arrival.

In each of his first eight seasons, McGinnity won at least 20 games and twice won more than 30. He led all of baseball in victories four times in his career and lived up to his “Iron Man” nickname as well. McGinnity averaged 344 innings a season during his career, twice throwing more than 400 innings.

McGinnity won 28 games in each of his first two seasons, leading the National League both times. At the beginning of his career, McGinnity pitched for the Baltimore Orioles and Brooklyn Superbas before joining the New York Giants midway through 1902.

With the Giants, McGinnity joined with Christy Mathewson to form one of the most dominant 1-2 punches in baseball history. From 1903-1908, McGinnity’s last year in the major leagues, either he or Mathewson led the National League in victories in every season.

Mathewson and McGinnity’s dominance would produce NL pennants in 1904 and 1905. In the latter season, McGinnity won 21 games during the regular season and added a shutout in the World Series, helping New York defeat Philadelphia 4-1 in the second edition of the modern Fall Classic. 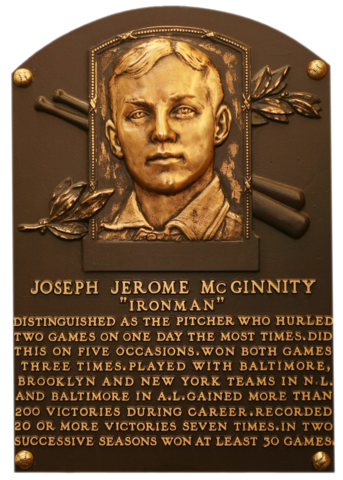 that Joe McGinnity, famed for winning both ends of doubleheaders in his younger days in the big leagues, once turned the trick at the age of 44 with Butte of the Northwestern League?