Jimmy Collins was a star as baseball entered the 20th century, acclaimed by many as the “king of the third basemen.” And while he was a good hitter, finishing with a .294 lifetime average, it was as a fielder he won the headlines.

“Collins was a model for all third basemen, the king of trappers and footworkers,” wrote 1978 J.G. Taylor Spink Award winner Tim Murnane. “Collins was always graceful. Bill Bradley, another great third baseman, would get twice the applause on the same play Collins made easy.”

“The two best third basemen I ever saw, defensively, until Ossie Bluege came along, were Collins and Bill Bradley of Cleveland,” said Washington Senators owner Clark Griffith, a former player and Hall of Fame executive. “But Collins, with the Red Sox, was a shade the better. He was a cat on bunts.”

As the toast of Boston, Collins, having spent the majority of his 14-year big league career with either the Braves or Red Sox, is credited with revolutionizing third base play, whether it was setting up defensively away from the bag or mastering the art of defense against the bunt.

“I came to the conclusion there was only one solution to this bunting game. A third baseman had to give himself a chance to get those fast guys,” Collins said. “Once around the circuit, you knew who would bunt and who wouldn’t. You knew (John) McGraw and (Willie) Keeler were bunters. So I played them on the edge of the grass.

“McGraw bunted and I came in as fast as I dared, picked up the ball one-handed and threw it underhanded to first base. He was out. Keeler tried it, and I nailed him by a step. I had to throw out four bunters in a row before the Orioles quit bunting that afternoon.”

Collins also spent a six-year stint (1901-06) as player-manager of the Red Sox in the fledging American League, skippering his team to two pennants and a triumph over the Pittsburgh Pirates in the first modern World Series in 1903.

At the time of his death, Collins was considered by many baseball observers as the best player at his position of all time.

“They say I was the greatest third baseman, and I would like to believe it,” Collins said. “But I don’t know. There were many great third basemen in my day.

“I gave baseball everything I had and when I quit, I was like the guy who died with his boots on.” 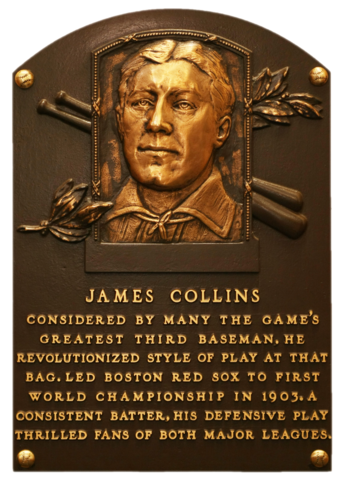 that on April 20, 1895, in just his second big league game, Jimmy Collins teamed with fellow Boston Beaneaters Hugh Duffy and Tommy McCarthy in an outfield of future Hall of Famers?

"With a swoop like that of a chicken hawk, Collins would gather up the bunt and throw it accurately to whoever should receive it. The beauty about him was that he could throw from any angle, any position on the ground or in the air. "
John B. Foster, Spalding Guide 1902