Many Hall of Famers made it to the big leagues with their bats or their arms. Max Carey did it with his legs.

“He was just as fast between the ears as he was with his feet,” said sportswriter Joe Williams. “That's what made him harder to stop than a run in a silk stocking.”

Born on Jan. 11, 1890, Carey was on track to become a minister at Concordia Seminary in St. Louis, Mo., but after playing baseball in college, he signed with South Bend of the Central League in 1909.

“The secret is getting a good jump,” said Carey. “I’d watch the pitcher’s motion and then be at full speed after two steps. I think stealing third can sometimes be easier than stealing second. It all depends on the pitcher.”

In 1922, Carey stole 51 bases in 53 attempts. He kept his legs in good shape in the off season but believed base stealing was more about timing than pure speed.

“Base stealing is a battle of wits between the runner and the pitcher,” Carey said.

In 1926, Carey had an argument with management and was waived by the Pirates. He joined the Brooklyn Dodgers, where he finished his career in 1929.

Carey not only excelled on the bases but led the National League in outfield putouts nine times and established a then-career record of 6,363 putouts. He hit over .300 six times for a lifetime batting average of .285 while recording 2,665 hits, 159 triples and 1,545 runs scored.

In 1930, Carey returned as a coach for the Pirates and also managed the Brooklyn Dodgers from 1932-33. He stayed active in baseball as a scout for the Orioles and managed several minor league teams.

In 1944, he became a skipper in a different league. He managed the Milwaukee Chicks of the All-American Girls Professional Baseball League. He was president of the AAGPBL from 1945-49 and managed the Fort Wayne Daisies from 1950-51. 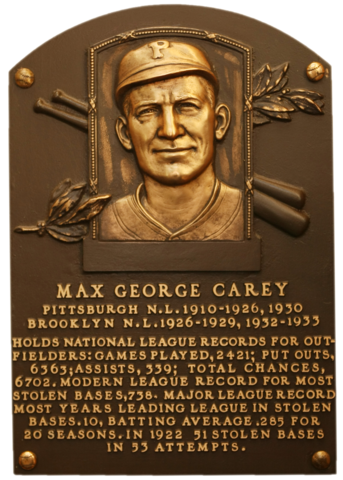 "He was just as fast between the ears as he was with his feet. That’s what made him harder to stop than a run in a silk stocking. "
Joe Williams (Sportswriter)

Stolen base kings Max Carey and Billy Hamilton were elected to the Hall of Fame in 1961.
Explore more Inductees