“Bill Dickey is the best (catcher) I ever saw… He was as good as anyone behind the plate, and better with the bat. There are others I’d include right behind Dickey, but he was the best all-around catcher of them all. I believe I could have won 35 games if Bill Dickey was my catcher.” – Bob Feller

In 1928, Bill Dickey was claimed on waivers from the Class D Jackson, Miss., team. Yankees scout Johnny Nee thought so highly of Dickey that he told Yankee GM Ed Barrow: “I will quit scouting if this boy does not make good”.

Dickey made his big league debut in 1928 and became the Yankees' regular backstop the following year. Playing alongside Babe Ruth, Dickey tried to model his game on the Bambino’s.

Manager Miller Huggins told Dickey: “We pay one player here for hitting home runs and that’s Babe Ruth. So choke up and drill the ball. That way, you’ll be around here longer.”

Dickey took his skipper's advice and started driving the ball all over the field. He soon became a force in the Bronx Bombers' lineup.

His defense, arm and game-calling ability were spectacular too. Yankee hurler Charlie Devens recalled: “I was lucky to work with Hall of Fame catcher Bill Dickey, who was always one pitch ahead of the batters.He not only called a great game, but had the best arm I’d ever seen.”

On the field, Dickey was all business. But off the field, he was mild-mannered and well-liked by all. As his career wound down he mentored young Yankee backstops. Yogi Berra said: “I owe everything I did in baseball to Bill Dickey. He was a great man.”

Elston Howard recalled: “You’ve got to have Bill work with you to understand how much he can help you. The year I came to the Yankees from Toronto, I wasn’t as good as a lot of semipro catchers. Bill took me over and he talked to me. Then he worked with me. We’d go off in a corner and practice. Without Bill, I’m nobody. Nobody at all. He made me a catcher.” 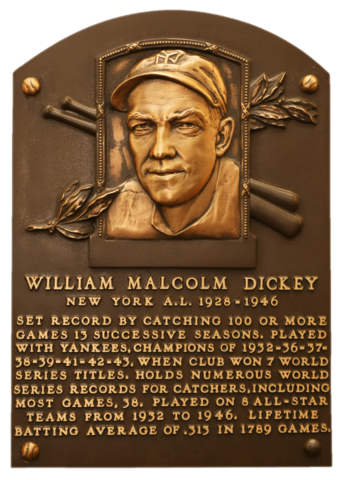 that Bill Dickey starred as himself in two baseball movies: Pride of the Yankees with Gary Cooper and The Stratton Story with Jimmy Stewart?

"He is the only man I ever saw who could make that tough [catching] job look easy. "
Bucky Harris