Lou Boudreau did it all in baseball – he played, managed and broadcast. He was an excellent defensive shortstop and a gifted hitter. After one game in 1938 and 53 games in 1939, Boudreau became the Indians regular shortstop in 1940, hitting .295, driving in 101 runs and leading the AL in fielding percentage for the first of eight seasons.

In 1942, the Indians shocked the baseball world by hiring their 24-year-old shortstop as a player-manager. Boudreau would continue in that role through 1950.

In 1946, he devised the “Williams Shift,” sometimes known as the “Boudreau Shift,” placing all of the infielders on the right side of second base and leaving only the left-fielder across the diamond in an attempt to stop the pull-hitting Ted Williams.

Few players or managers ever had a better season than Boudreau did in 1948. “That year, Lou Boudreau was the greatest shortstop and leader I have ever seen,” said Hall of Famer Bill McKechnie, a coach with the club. The Indians went 97-58 while Boudreau hit .355 with 106 RBI, a career-high 18 home runs, a .453 on-base percentage and struck out only nine times in 560 at-bats.

The Indians and the Red Sox finished the regular season tied, necessitating a one-game playoff at Fenway Park, in which Boudreau went 4-for-4, homering twice. The Indians went on to beat the Braves in the World Series, and Boudreau picked up the AL Most Valuable Player Award.

Boudreau moved to the Red Sox for the 1951 season, and was a player manager for the club in 1952, his final season as a player. He managed the Sox for two more seasons, before taking over the Kansas City Athletics from 1955-57.

In 1958, he moved to the radio booth for WGN and the Chicago Cubs. In 1960, he was involved in a most unusual “trade,” switching places with Cubs manager Charlie Grimm.

Grimm went up to the radio booth, while Boudreau took over as manager. In 1961, he was back on the airwaves, where he remained with the Cubs until 1988.

“He had terrific instincts and was a great competitor," said his Hall of Fame teammate Bob Feller. “As a player-manager, he became so good that he went as far as calling pitches from shortstop. He was always thinking, always in the game.” that Lou Boudreau was a great college basketball player, leading the University of Illinois to the Big Ten title in 1937 and earning All-American honors in 1938?

"He discounts his lack of speed by getting an uncanny jump on the ball and playing hitters with rare judgment and instinct. His hands are ‘too small,’ but there is not a surer pair on any infield. He has an ‘impossible stance,’ but he won the American League batting championship. As a competitor, he has few equals and no superiors. "
H.S. Salsinger, The Sporting News, June 29, 1948 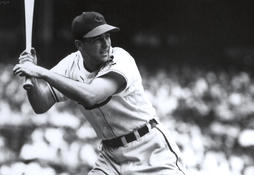 Lou Boudreau's 1948 season was one of the greatest shortstop seasons of all time.
Explore more Inductees