"When I first heard about him, about all the stunts he pulled, I said to myself for a fellow to do all those crazy things and still keep his job, he had to be a damned good ball player." – Joe McCarthy

Rabbit Maranville stands out in baseball history as one of the game’s unique careers and unusual personalities. Any discussion of Maranville must include mention of the stunts he pulled but shouldn’t solely focus on the player’s colorful side. Indeed, Maranville could play ball, especially defense.

Maranville made his big league debut in 1912 and quickly made the Boston Braves a factor in the National League. He finished third in the Chalmers’ Award MVP voting in his first full season, 1913, despite hitting just .247. But at shortstop, Maranville quickly developed a reputation as one of the game's best fielders. Modern metrics support this, as Maranville led the league in defensive WAR (wins above replacement player) three times, including a 4.2 mark in 1914 that ranks in the Top 15 all-time in that category.

That season, Maranville helped the Miracle Braves storm to the National League pennant after finding themselves in last place as late as July 18. Maranville hit .246 in a league-best 156 games that year, then hit .308 with three RBI as the Braves swept the heavily favored Athletics in the World Series.

Listed at just 5-foot-5, 155 pounds, Maranville was better suited to the Dead Ball era when his career started, but was improving as a hitter when World War I hit. He hit .260 in 1917 for Boston and then .267 with a career-best five home runs in 1919, sandwiched around a 1918 season cut to 11 games by his military service. Maranville’s numbers then picked up in 1920 with the livelier ball.

Maranville was traded to the Pirates following the 1920 season, playing in Pittsburgh from 1921-1924, then was traded to the Cubs for the 1925 season, becoming the team’s player/manager during the year before he was released. In 1927, after a stint in the minor leagues, Maranville resurfaced with the Cardinals, and at age 36 became the team’s everyday shortstop in 1928, helping St. Louis win the NL pennant and finishing 10th in the league's MVP voting.

From 1929-33, he returned to Boston as a regular shortstop and second baseman for the Braves, earning MVP votes in four of those five seasons. After a handful of games in 1935 with the Braves, Maranville retired.

Maranville passed away on Jan. 5, 1954, the same year he was elected to the Hall of Fame. 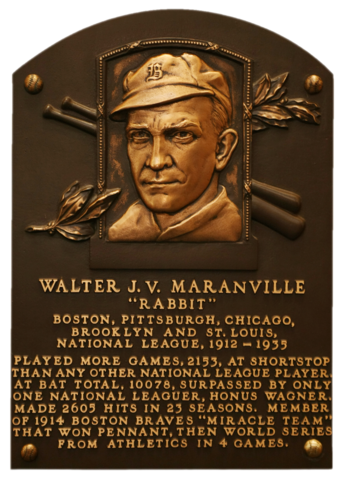 that Rabbit Maranville's record for most seasons played in the National League lasted for over 50 years until Pete Rose bested the mark in 1986?

"Walter Maranville is the greatest player to enter baseball since Ty Cobb arrived. I have seen 'em all, since 1891, in every league around the South, North, East and West, but Maranville is the peer of all of them. "
George Stallings