“Joe had no prominent weakness. He was fast on the bases, could hit the ball hard and was as graceful an outfielder as one would care to see.” –John McGraw

Aside from topping the National League with 87 stolen bases in 1896, Joe Kelley rarely led the league in any categories. But he was a well-rounded outfielder who could run, hit for average and get on base and annually ranked among the league leaders in various power-hitting categories as well.

Kelley made his major league debut at 19 with the Boston Beaneaters in 1891, but he was released after a brief big league trial. The following season Kelley joined the Pirates, where he appeared in 56 games before Pittsburgh traded him to Baltimore.

By 1893, Kelley had established himself as a regular in the Orioles lineup, hitting .305 to start the first of 11 straight seasons in which he hit over .300. Kelley became one of the most productive players in baseball during the late 19th century, playing with the Orioles through 1898. From 1894-1898, Kelley drove in at least 100 runs in each season, and his 573 RBI during that stretch were more than anyone in baseball other than Hugh Duffy.

One of the greats of his time at getting on base, Kelley’s 401 walks from 1894-1898 ranked fourth in baseball during that span, while his 909 hits ranked eighth.

The Orioles were a last-place team in 1892, but Kelley’s arrival led to a surge in the standings. After an eighth-place finish in 1893, the Orioles won three straight NL pennants from 1894-1896, then rattled off back-to-back second-place finishes in 1897 and 1898, Kelley’s final year with the Orioles.

Kelley joined the Brooklyn Superbas in 1899. While the Orioles dropped to fourth place in the NL, Brooklyn jumped from 54 wins and a 10th-place finish in 1898 to 101 wins and its first of two straight NL pennants with Kelley in 1899 and 1900. After the 1901 season, Kelley joined the Baltimore Orioles of the American League. When new ownership took over for the Orioles during the season, the franchise released Kelley, who hooked on with the Cincinnati Reds during the 1902 season.

Serving as a player/manager for the Reds from 1902-1905, Kelley led the club to an 88-win season in 1904 and a third-place finish. Though his production as a player declined toward the end of his career, Kelley was still effective during his 30s with Cincinnati, ranking ninth in the league in OBP in 1903 and seventh in extra-base hits in 1904.

For all of his offensive exploits, Kelley’s outfield play was also held in high esteem by those who saw him play.

“Kelley was one of the greatest outfielders of all time,” said Dutch Brennan, a former major league scout. “He was rated the kingpin of the Orioles outfield. He covered a lot of ground and was one of the best hitters in the league.” 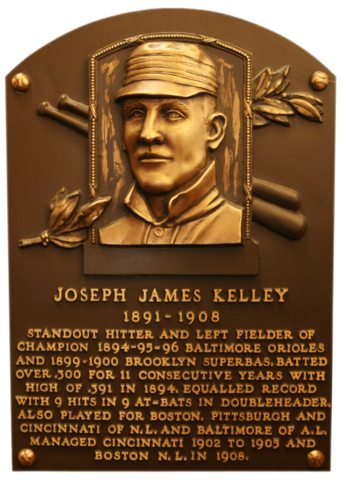 that Joe Kelley made his Major League debut on July 27, 1891, with a single in his first at-bat off future Hall of Fame pitcher Mickey Welch?

"He unloosed his throwing arm and amazed the natives by the ease with which he threw in from the deepest field to the home plate. He scooted over all the outfield the same as a jackrabbit and he cared not if the sun shone in his eyes. When he had helped retire the foe and came himself to the plate, he swung mightily with the force of his giant strength, and they picked up the pieces a few miles further down the pike. "
W.W. Alick, The Sporting Life, April 1911